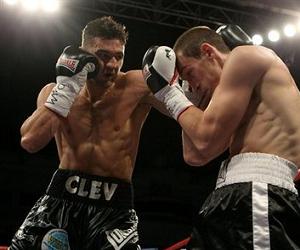 WBO light heavyweight champion Nathan Cleverly (24-0, 11 KOs) scored a one-sided, but uninspired twelve round unanimous decision over heavy underdog Tommy Karpency (21-3-1, 14 KOs) on Saturday night at the Motorpoint Arena in Cardiff, Wales. Cleverly was in command all the way, but was never able to sufficiently break through the cover of the defensive-minded Karpency to get the stoppage. Scores were 120-108 on all cards. It was Cleverly’s first fight in his native Wales in almost four years.

“Tommy is very tough,” said Cleverly afterward. “Out of every fighter I’ve fought, he’s punched the hardest so far. And I’ve fought some big punchers…It was a nice performance, a good workout. It was exciting and there’s plenty more to come from me.”