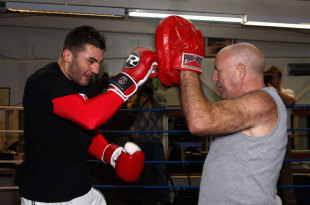 Nathan Cleverly is hoping to help “bring the glory days back to Wales” when he takes on the “dangerous” Tommy Karpency at Cardiff’s Motorpoint Arena on February 25.

The WBO light-heavyweight champion is busy preparing for his title defence, which will be his first fight in Wales since 2007, and is looking forward to having the eyes of the sporting world on Cardiff and Wales that weekend.

Hours before his clash with American Karpency, Wales collide with England at Twickenham, while Cardiff meet Liverpool in the Carling Cup final on Sunday at Wembley.

“It’s a great weekend of sport and it’s great to be involved,” the 24-year-old told the Daily Mail. “I can see why there could be potential pressure on me but I’m just enjoying the occasion, which I think will enhance my performance.

“It’s a big deal for myself, and for Welsh boxing; hopefully we can bring the glory days back to Wales. To come home as world champion is a special occasion.

“Training is going well, everything is on track. It’s just a case of focusing for the last three weeks.”

Many are tipping Cleverly to make light work of his opponent, but Karpency has never been stopped in 24 fights.

“He is tough,” said Cleverly. “He has operated at cruiserweight so he’s a strong fighter. He’s got not nothing to lose and there’s no pressure on him, so he’s potentially dangerous. He’s a trained fighter so he’s capable of causing an upset just like anyone else.”

Should Cleverly manage to safely negotiate his way past the challenge in front of him, bigger fights await the Welshman.

“After this fight we’ll be looking to get straight on the case and have a unification fight in the summer. Bernard Hopkins is regarded as No. 1 in the division and I know he’s got a big fight with Chad Dawson coming up. These guys are the ones you target to become the best you can.”