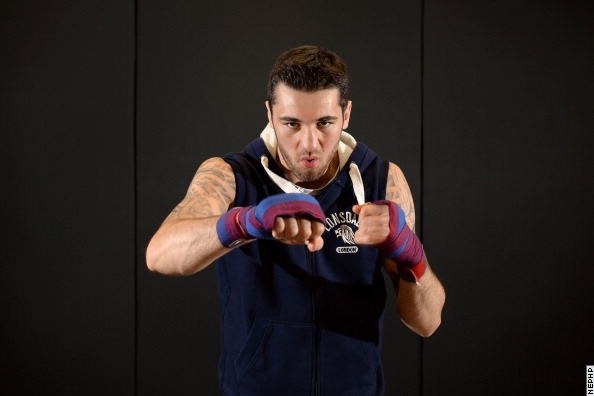 Cleverly: I win because I bring the better all round package. I expect to stop Kovalev midway to late For some time now, WBO light heavyweight king Nathan Cleverly has been putting himself on offer as the finest 175lb prizefighter on this planet. On Saturday evening, at Cardiff’s Motorpoint Arena in his native Wales the 26-year-old from Cefn Fforest finally gets his chance to convince others of the veracity of his claim when he makes a sixth defense of his belt against formidable Russian Sergey Kovalev (21-0-1, 19 KOs). When Cleverly spoke with boxing writer Glynn Evans, the champion was adamant that he was physically and psychologically primed to meet the challenge.

Reflecting on your comprehensive points win over mandatory challenger Robin Krasniqi in April, what aspects of the performance pleased you? And what were you not so happy with?

I think it was one on the most complete performances of my career. I’d give myself at least eight out of ten.At times I boxed very nicely, stuck to my game plan and avoided being reckless. Krasniqi was a decent challenger yet I got hit very little. But there’s still a few little things I need to brush up on. I hurt Krasniqi early on, saw his knees dip, but when I opened up, I threw speedy flurries when I might have been better served setting my feet and unloading with power shots. Other times, I left myself a little open to right hands because my left lead got a little lazy. To be fair, Krasniqi was very sharp but I’ll certainly need to correct that against a puncher like Kovalev.

It’s expected for world champions to talk of unification but you actually seem ready now. In what ways do you perceive that you’ve improved as a fighter since you first acquired the WBO (interim) belt two and a half years ago?

I believe my progress has been very satisfying. My last few fights have been particularly good learning experiences for a future on the top world stage. For a start, I’ve matured with age. I’m more controlled and focussed both in training and in the fight. My attitude is better. I’ve left behind that studenty lifestyle. Big fights beckon and people are gunning for me. Consequently, I’ve become a lot more serious about my boxing. I’m also fitter and I’ve now acquired my man strength. I can really feel that now when I’m in the ring. People go on about my supposed level of opposition but I’ve beaten Bellew who’s mandatory at the WBC. I’ve beaten Murat who’s now mandatory to Hopkins at the IBF. Now I’m facing Kovalev who’s rated second at the WBO after I’ve just dispensed with my mandatory (Krasniqi). I honestly feel I’m now ready for anyone in the division.

What motivates you most; scalps, belts or money?

Probably beating the big names. It depends who holds the belts. I badly want Bernard Hopkins. If his IBF belt was on the line that would be ideal but even if he was stripped I think I’d prefer that fight to a unifier with one of the other champions. But the other belts certainly interest me. I really want to unify all the titles and be recognised as the undisputed number one in the division. When that happens I’ll feel fulfilled, that my time in boxing is complete. If I achieve that, the financial security should follow automatically. Since I was a kid, I’ve worked really hard with the boxing so it’d be nice to reap the material rewards and know that all the graft was worthwhile.

Tony Bellew and Carl Froch have been mooted as potential future opponents. How do you think they’ll fare in their forthcoming world title fights with Adonis Stephenson and George Groves respectively?

I think Bellew beats Stephenson. He’s naturally a lot bigger. Adonis is just coming up from super-middle and is pretty short. Bellew should be able to outbox him. If he does win I’d certainly be interested in a rematch to unify the belts and establish myself as the main man in our division. I’ve already beat him comfortably enough in his home town and, I’ll do him again. Froch-Groves is a very interesting fight. George has the better skills and it wouldn’t surprise me if he starts cagily and frustrates Carl a bit. Carl might try too hard over the first half. But I’d still have Carl as favourite because of the momentum he’ll be bringing. He might just have a bit too much force, aggression and man strength down the stretch. I’d loved the Froch fight, but Carl’s a clever man. He knows I’m bigger, stronger, just as fit and far sharper. I don’t blame him for knocking me back.

Saturday’s fight coincides with your team Cardiff City’s return to the top flight of English soccer. Is that a good thing or bad thing for Nathan Cleverly?

It’s a good thing, definitely. For a start, their match away to West Ham will help occupy my mind on Saturday afternoon. Several of my last few fights have coincided with big City matches or Welsh rugby internationals and it breeds a feeling of togetherness in Wales; a team thing. It’s a big sporting weekend for the nation. Success breeds success. Thus far, touch wood, I’ve been a cog in some very successful sporting weekends for Wales. Hopefully that’ll continue come Saturday.

Saturday certainly represents your highest profile fight to date. HBO, BoxNation and First Channel (Russia) shall all broadcasting and a sizeable US media presence is also expected. Is it something you welcome or an unwanted distraction?

All the interest is good. It’s become a part of my job and I’ve learned to enjoy it more over time. As I’ve matured, I feel more in control, more relaxed about it. It’ll be good preparation for all the superfights I intend to have further down the line. All the hard training is done now. It’s time to relax. The last week is all fun and games. Us boxers can only do so many hours at the gym so we have a lot of free time on our hands. Fulfilling media obligations passes the time, fills spaces in my day.

The bookies have the fight pretty much ‘pick ‘em’. How important do you feel a boisterous Welsh crowd will prove in inspiring you, and unnerving Kovalev?

I don’t expect the home crowd will unduly affect Sergey too much because he comes across as a ‘no nonsense’ sort of character who just comes to fight. Don’t forget, he had a lot of international amateur experience. However, from my end, it’s always more comforting having the fans behind you. They’ll cheer every shot that lands, some that don’t, and it can have an influence. They also help to drive you on when it gets tough, particularly in the later stages. I’ve no doubt they will inspire me.

Enlighten us about your preparation. Have you needed to step up the intensity or experiment with anything new?

It’s gone really, really well and it’s a relief knowing that I’m going into such an important fight in such fantastic physical and mental health. Now it’s all about applying all that and executing my game plan under the spotlight and pressure of the big stage. For this camp, I’ve stayed local and stuck with the basics. My house and gym are close by and I got into a nice routine. For sparring, I’ve had Ovill McKenzie – a very dangerous puncher – plus a couple of strong powerful cruiserweights so nothing Kovalev brings should shock me unduly. One thing I’ve tweaked is I’ve heightened my attention to the tactics and game plan. It’s all been very specific whereas, previously, I’d just turn up and rely on my instincts on the night.

With 19 stoppages in 21 wins as a pro, Kovalev certainly arrives with a reputation as a formidable puncher. Will that make you more apprehensive than normal?

Not really, I don’t think. Knowing he’s so dangerous has certainly kept me on my toes in training but a bit of fear is great for motivation. Back in the amateurs, as a kid, I’d always seek out opponents with reputations for being bangers. I always wanted to prove myself and I always came out on top. When I started to become aware of the commotion building over Kovalev in the US, I said to Frank (Warren): ‘Go and get him for me.’ Knowing that he’s almost certainly going to come looking for me is a good thing; for me, for TV, for the fans at the venue. It’s going to be a proper fight. Him unloading will leave openings for me to exploit.

You appear to have a technical edge over Kovalev. However, you do like to get involved and excite the paying punters. Can you trust yourself to remain disciplined before a fanatical home crowd?

In preparation, we’ve focussed a lot on not going ‘gung ho’. However, now it’s up to me to prove I can stay calm and deliver on the night, under the roars. A few fights back, I might have struggled but now I believe I can keep my focus and do what’s right.

It’s a cracking, competitive match-up that’s split the trade on both sides of The Pond. How do you envisage the fight panning out and what gives you confidence that it’ll be your hand that get’s raised at the end?

I think it’s inevitable that there’ll be a lot of exchanges because we both like to let our hands go. It’s probable that we’ll both land frequently and it’ll be interesting to see how each of us react when the other lands. Will they withdraw into a shell or will they look to strike back? We both like to operate on the front foot so I doubt that this will be a cagey affair. I envisage an action packed, long fight. I’ll win because I bring the better all round package. Kovalev’s a banger who’s accurate and a decent boxer but, it terms of skill, speed, sharpness, fitness, speed chin, I beat this guy. I expect to stop him mid way to late.

And if you prevail, what do you hope that it will lead to?

Hopkins is definitely the way forward for me. An impressive victory on Saturday will open a heck of a lot of doors. Hopefully I’ll secure the US TV deal I need to make the biggest fights happen.