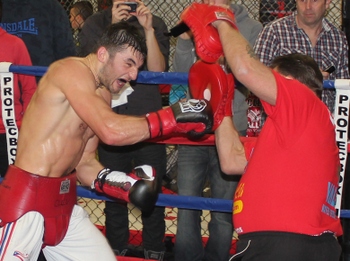 Promoter Frank Warren hopes to set Nathan Cleverly up with a big summer bout against Bernard Hopkins in Cardiff.

Warren would like his next outing to be at London’s Royal Albert Hall in April – the venue’s first professional boxing bill for 10 years – but a megafight with American veteran Hopkins is where big money could be made.

The Caerphilly fighter, who completely outclassed Karpency in Cardiff en route to a unanimous decision from the judges, has already spoken of his desire to move on to a big unification fight, with the winner of the April 28 WBC title clash between Chad Dawson and Hopkins top of the agenda.

While Warren is looking to put that contest on at the Millennium Stadium or Cardiff City Stadium, he has also revealed he hopes the Welshman will defend his belt in London, also on April 28.

Warren said: “Nathan is coming on in leaps and bounds and all our attention will now of course turn to April 28 and the Bernard Hopkins v Chad Dawson fight, then we will be making a big decision about a fight in the summer. “In the meantime I have the Royal Albert Hall booked for April 28.

“I don’t know if Nathan will be ready for that but I would not mind him being the guy to take boxing back there.

“There has been no professional boxing there for many, many years, it is probably the best venue in the country, the most prestigious venue and you could not get a better representative for British boxing than Nathan, to showcase taking professional boxing back there.”

As for a potential summer stadium bout in south Wales, which would hark back to the glory days of former super-middleweight king Joe Calzaghe, Warren says his preferred opponent for such a contest is Hopkins, and

defeat to Dawson would not rule the veteran American out of facing Cleverly.

He said: “For me the best fight for Nathan would be Hopkins.

“I have a feeling Dawson may upset the odds when they face each other, he will give him a lot of problems, but I would prefer Hopkins.

“He is a big name, he had a good fight with Joe Calzaghe and if we brought him over and did that show at Cardiff City Stadium or the Millennium Stadium, it would be a great atmosphere with maybe 50,000 people in there.

“Nathan needs big fights, he rises to them and he has great temperament.”

Cleverly, whose victory extended his 100 per cent record to 24 wins from 24 fights, said he would gladly accept the chance to fight Hopkins, and also suggested he would be ready to fight again on Warren’s mooted Royal Albert Hall date.

“I want to go and get a few more fights as champion to keep learning about being world champion,” he said. “This wasn’t a brutal fight so I will be fine for April, it will be good to keep active.”

He added: “I think I am ready to be unified champ.

“Hopkins and Dawson are the elite guys in the division, if you want to be the best those are guys you have to head for.

“I think I will be ready by the summer, if the opportunity came I would grab it with both hands and feel I could win the fight.

“Hopkins is a legend of the sport, an icon in the division, he has that aura. The fans showed their support by coming out tonight and I am sure that would be a good fight.”