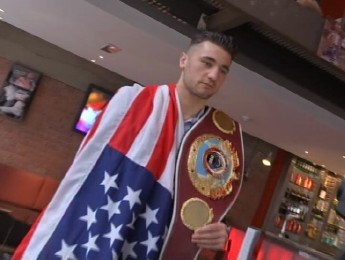 Cleverly Hoping Kovalev Will Be His ‘Lacy’ Moment By Nick Parkinson, courtesy of The Daily Star –

NATHAN CLEVERLY sees victory on Saturday as the gateway to global fame and fortune – but admits he starts as the underdog.

The Welshman’s sixth WBO world ­light-heavyweight title defence is his most dangerous yet against unbeaten Russian Sergey Kovalev, who has knocked out 19 of his 22 opponents.

Some even make Kovalev, 30, the favourite but Cleverly has likened the fight to his former sparring partner Joe Calzaghe’s 2006 points win over American Jeff Lacy.

And he believes it will increase his profile as he strives to set up a clash with a rival world champion.

He said: “Joe’s fight with Lacy and mine with Kovalev, they’re both very similar scenarios. Joe just said to me, ‘It was the same with me and Lacy – and look what happened then’.

“It’s a big challenge for me and one I’m taking very seriously.

“It’s the breakthrough fight for me in the US and will hopefully bring the big fights against the likes of Bernard Hopkins.

“A stoppage or a late stoppage would make a massive statement.

“I’m not surprised Kovalev is the favourite – naturally, a lot of these guys come over from America with a lot of hype.

“In a lot of my fights I’ve been massively expected to win, this one I’m expected to lose and get taken out, so that’s inspired me in training, kept me on my toes and working hard.”