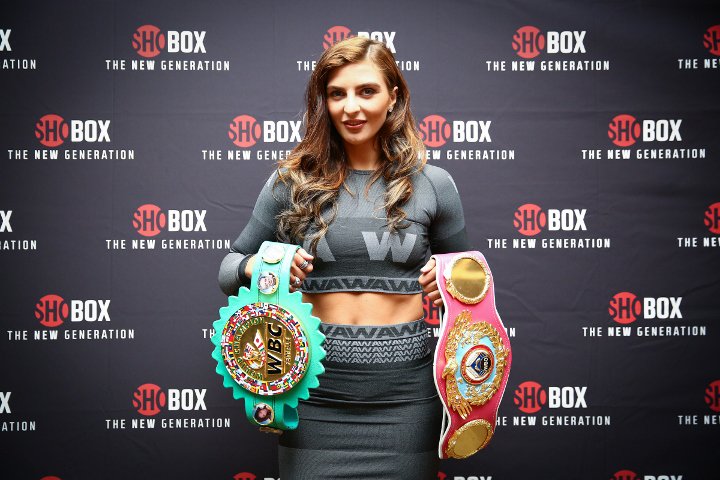 Christina Hammer: Claressa Shields is NOT as Good as Me! DETROIT — Claressa Shields is calling herself the GWOAT.

In the boxing ring, it’s hard to argue with her boast of being the Greatest Woman Of All Time.

“Who’s better than me?” Shields asked after pummeling Nikki Adler on Friday night, giving the two-time Olympic champion the Women’s WBC and IBF Super Middleweight world titles. “I don’t know of anybody yet. And if I do find somebody, I’m ready to take her out.”

The lopsided fight was mercifully stopped at 1:34 of the fifth round, awarding Shields a victory by technical knockout. She used a combination of powerful punches that left Adler defenseless in a matchup of previously unbeaten boxers.

“I felt tired and weak in the ring,” Adler said after her U.S. debut.

She looked tired and weak, too.

The 22-year-old Shields took control against the 30-year-old Adler in the opening round, landing a flurry of blows that sent her staggering against the ropes.

Shields (4-0, 2 KOs) didn’t let up in the second, stunning Adler (16-1) with a left hook midway through the round. Shields went to her body in the third round before aiming high in the fourth, hitting Adler squarely in the face with a right that seemed to set up the end of the fight in the fifth.

In the end, Shields landed 136 of 340 punches while Adler connected on just 6 of 84. In the first and fifth round, Adler failed to connect once.

“She wouldn’t punch,” Shields said. “Then when the hook stumbled her, I said, `Oh man, she ain’t got no chin?’ When I saw that, I was like, `It’s going to be an early night for her.’ I thought she was a bit tougher. I must’ve hurt her really bad because she stopped punching and I dominated after the first round.”

WBO and WBC middleweight champion Christina Hammer (21-0, 9 KOs) watched the bout near the ring, scouting potential opponents and rooting against Adler, who also lives in Germany.

“I hope to fight Claressa next year,” Hammer said, wearing a gold dress and displaying her championship belts in an empty seat next to her.

Hammer, who is from Kazakhstan, got her wish and some advice from Shields as both stood near each other during post-fight interviews.

“She better keep her hands up,” Shields said.

Adler tried that, and putting her white gloves in front of her face was no match for Shields’ shots to her head.

“You are not as good as me,” Hammer flatly told Shields in the ring.

The nearly 1,000 fans who filled a ballroom at the MGM Grand Detroit loved the dominating performance, cheering for a fighter from Flint, Michigan, who seemed to have a lot of supporters that made the hourlong drive from her hometown. Shields became the first woman to headline a fight card on premium cable in March, and she did it again Friday night, earning top billing on Showtime.

She is the only American, male or female, to win a boxing gold medal since Ward captured one in Athens in 2004. The only other U.S. boxer to win two Olympic gold medals is Oliver Kirk, who won took bantamweight and featherweight titles at the 1904 Olympics.

As the stage she fights on potentially gets larger, Shields plans to take some time off before figuring out what’s next.

“Me and my team got to sit down and see which fights make sense,” she said.