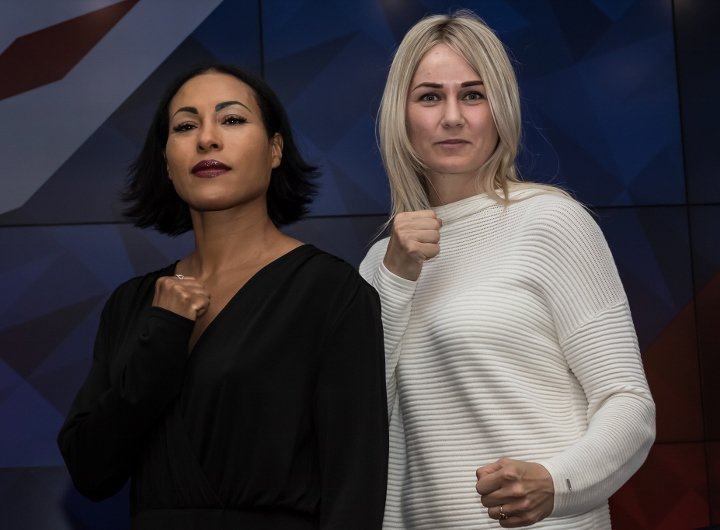 Women’s #1 Pound-for-Pound Fighter in the World and Boxing’s Only Undisputed World Champion, ‘The First Lady’, Cecilia Braekhus, (33-0, 9 KO’s), defends her world titles (WBO, WBA, WBC, IBF and IBO) against Undefeated WBC Interim Junior Middleweight Champion Inna ‘The Ice Queen’ Sagaydakovskya, (7-0-0, 3 KO’s), on Saturday, July 21 at the Olympic Stadium in Moscow, Russia, it was announced today at a press conference in the Russian capital attended by both women.

Braekhus vs. Sagaydakovskya will be the chief support to the highly anticipated World Boxing Super Series Final between cruiserweight world champions Murat Gassiev of Russia and Alexander Usyk of Ukraine. The event takes place just six days after the final of the World Cup.

“I’m very excited to be here today announcing my next fight,” said Braekhus who returns to battle following a tremendous performance in a decision victory over Kali Reis on May 5, 2018 at the StubHub Center in Carson, CA which garnered the second highest TV ratings in 2018 for a boxing match shown on premium cable in the United States.

“This is a huge international event, a great event for women’s boxing. Oslo is not so far from Moscow and I believe many of my fans will be able to come to the fight.

“I want to be a global champion — I fought in Germany, in Norway, in the USA. And I will fight in Moscow now.”

“Inna is dropping down in weight but she is very strong physically and mentally. She has experience and this is not going to be easy at all. This will be a great fight.”

Said Sagaydakovskaya: ”I was waiting for this moment, finally this fight will be held. I expect to have a great training camp with my new coach Andrei Ivichuk and I expect that victory will be mine.”

“I’ve boxed on the national team for many years, I have a lot of experience – and it’s not even about who has so many fights but who is more prepared and more ready to win on July 21.”

Continued Braekhus, “I was thrilled to fight for the first time in 10 years in the United States and proud to be part of the first women’s bout on HBO and now this fight in Moscow is a new journey for me. I fought here as an amateur and look forward to fighting in front of a huge crowd of up to 30,000 on July 21 against Inna Sagaydakovskya.”

“I know that Inna is a very strong, hard-hitting fighter judging by her recent knockout of Jennifer Retzke but my trainer Johnathon Banks and I have studied her fights and we are confident of victory.”

Braekhus has opened training camp in Kiev, Ukraine where she will prepare with her trainer Johnathon Banks until leaving for fight week in Moscow.

“This year has been one of taking chances and taking different paths than I have in the past. This fight on July 21, which will be telecast worldwide, is very big not just for me but for all of women’s boxing.”

Braekhus has held all of the sanctioning body world titles in the welterweight division since defeating Ivana Habazin in September 2013.

Sagaydakovskya defeated Maria Lindberg on September 29, 2017 in Bilbao, Spain by ten-round decision to earn the vacant WBC Silver Women’s Super-Welterweight Title. In her next bout, she stopped Jennifer Retzke in the second round on December 30, 2017 in Almaty, Kazakhstan, winning the WBC Interim Women’s Super Welterweight Title.