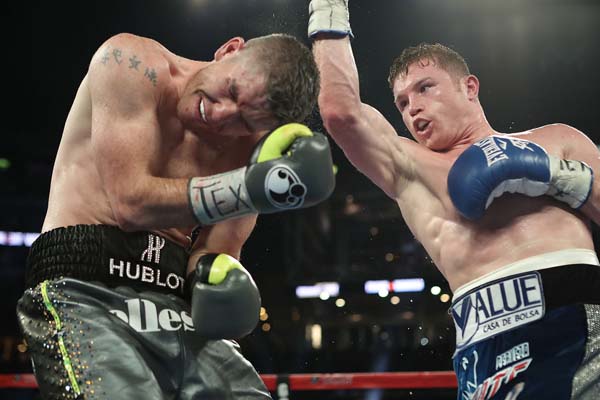 By Jeff Zimmerman and Miguel Maravilla at ringside

On Mexican Independence Weekend in Arlington, Texas, Canelo Alvarez (48-1-1, 34 KOs) claimed the WBO light middleweight title at AT&T Stadium, home of the Dallas Cowboys, with a 9th round KO of reigning world champion Liam “Beefy” Smith (23-1-1, 13 KOs). Canelo dropped Smith in the 7th, 8th and 9th rounds. The last was a left handed blast to the body that finally did in the tough Brit who sustained a body shot in the eight and an overhand right that also sent Smith to the canvas. The official time of the KO was 2:28 of the 9th round.

Canelo came out strong from the opening bell, as expected, but also Smith showed his willingness to exchange with the strong Mexican from Guadalajara. Canelo continually went to the body early but Smith countered with body and head shots of his own. In the latter rounds, Canelo laid against the ropes as Smith unleashed shots to the body and head of Canelo, but none that ever seemed to hurt Canelo as he countered with vicious upper cuts and devastating shots to the body that eventually took its toll and eventually put an end to an entertaining fight.

Canelo was complimentary of Smith afterwards in the ring, “Liam Smith was a resilient fighter, he was tough, has a lot of heart. He thinks before he attacks, I could tell in the way he blocked in the way he approached me.”

Canelo added, “I was actually only using my left hand for the most part, making sure left hand was connecting with power. I hurt my right hand in the second round when I hit him in the head. The body shot, was what I focused on, making sure I worked his body down, and that is what secured the victory today.”

Smith was disappointed in defeat but also praised Canelo who walked away with his WBO belt. “If I would have waited a little longer and gotten more experience I would have been able to fight a guy like that better. I am very disappointed. Canelo was too good today, I needed better timing, and my timing was off tonight.”

The announced crowd of 51,240 was the largest of the three staged at Jerry World for a boxing event which broke the previous record of 50,944 for Manny Pacquiao vs. Joshua Clottey. It was loud and electric throughout which should bode well for a potential fight with GGG next year.