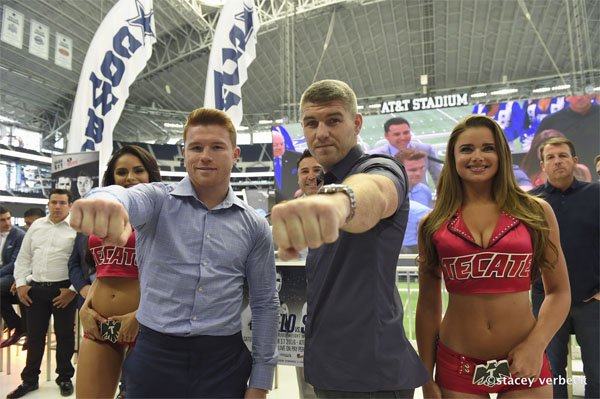 Oscar De La Hoya and his golden boy Canelo Alvarez (47-1-1, 33KO) made their first stop today at the home of the Dallas Cowboys, A&T Stadium, for the first of their 2 city press tour that then takes them to London to announce Canelo’s fight with current WBO Jr Middleweight Champion Liam “Beefy” Smith (23-0-1, 13KO). De La Hoya, along with Dallas Cowboy’s Owner Jerry Jones and the camps of Canelo and Smith were on hand today to address the DFW media. The fight is scheduled for Saturday, September 17th at AT&T Stadium and on HBO PPV.

Today was somewhat subdued, however, because of the recent shooting of Dallas police officers which De La Hoya recognized in his opening remarks with a moment of silence. Because of the recent tragedy, today’s presser was a far cry from when De La Hoya was still on top of the boxing world as a fighter when he strolled through Dallas to promote his fight with Floyd Mayweather back in 2007 and was greeted with thousands of fans outside of American Airlines in Dallas only there to catch a glimpse of the Golden Boy.

Almost 10 years later, he now promotes the biggest draw in boxing Canelo Alvarez and there’s no doubt the two of them alone would have packed city streets for hours with adoring fans, but instead in this new world we live, Canelo celebrated his 26th birthday today in front of mostly DFW media, although he was greeted with mariachis, a cake and a Dallas Cowboys jersey.

But there’s no spectacle in sports like Jerry Jones’s Cowboy Stadium and it didn’t matter if the place was empty, De La Hoya was thrilled to bring Canelo to the Lone Star State once again.

“Not because Jerry is here and this is his arena, this is very, very impressive. I have never seen anything like this. I have never been in an arena that is so impressive. Every single seat, that seat way up there, you have a perfect view not only to the screen where the fighters will be 70 feet tall but to the ring right on the 50 yard line.”

De La Hoya added: “It’s such a beautiful arena. We are thrilled, we are honored, we are happy to be here.”

Unlike the always gregarious De La Hoya, Canelo is more serious and noted this was a business trip for him. He did address if it bothered him not getting the opportunity to fight Gennady “GGG” Golovkin in a mega bout that would have surely blown the roof off of Cowboy Stadium.

“No not one bit, things happen for a reason and unfortunately it didn’t happen, but it’s going to happen one day. At this time, we are focused on our fight right now.”

On whether this fight guarantees a future fight with GGG at AT&T Stadium.

“Everything is going in the right direction for that to be.”

De La Hoya plans to bring back Canelo to AT&T Stadium, but was hesitant to say if a fight with GGG would land here.

“Absolutely. This is a wonderful stadium, an incredible arena. First things first, you can’t win a Super Bowl before playing in the playoffs. A lot of teams don’t get to the Super Bowl because they lose. This is not an easy fight for both of them. It’s going to be a tough competitive fight, so we’ll have to wait and see.”

Dallas Cowboy’s Owner Jerry Jones was also front and center at the presser and is now an old pro of promoting big time boxing with two Manny Pacquiao fights under his belt back in 2010. Jones had his take on a potential Canelo versus GGG at his place.

“I think that’s coming, I think that’s coming. What we have is this [Canelo-Smith]. This will be, this could have some things that might not have. I understand the reputation and I don’t want to take anything away and I’m not going to say that it’s the same fight perception wise, but this fight could give everybody the expectation of what might come if that fight is staged. On the other hand, we may have a guy here in Smith that distinguishes himself.”

Canelo was criticized for not taking the fight with GGG and instead moving down to 154, shared his thoughts on GGG fighting Kell Brook, a welterweight.

“That’s why I recommend people don’t open their mouth and speak out because sometimes you bite your tongue.” Canelo did indicate he expect GGG to win the fight.

Canelo is not looking past Smith however.

“The goal is to win by KO but we are going to prepare ourselves for 12 rounds and if it comes it comes.”

Smith did his best to remind everyone he was the champion at 154 and he’s ready for Canelo.

Smith added, “I’m not going to get out there and say I lost to a great champion and all that. I got massive respect for him as a fighter for what he has done for Mexican boxing, but that’s it. I am not in awe of him, I am not in fear of him, I’m coming here as a big 154, not a blown up 147 like Amir Khan. I am going to make him fight 3 minutes of every round. He better not overlook me.”

De La Hoya believes this has the potential for a great fight.

“It’s going to be an exciting fight, I believe once again a fight of the year candidate. Canelo Alvarez is a tremendous, tremendous puncher and boxer. Liam Smith is a champion for a reason. He’s undefeated for a reason. There’s a reason why the UK now has 14 world champions and Mexico only has 7. Canelo has to step up and Liam Smith has to give it his all. At the end of the day the fans are going to be the winners.”

Jones took it up many notches when he evoked the names Hagler and Hearns on what this fight could be like.

“I think we can have the classic fight, the competition between these two. While we can’t measure it right now, but still we have the potential that this thing will be toe to toe, maybe toe to toe like some of the great fights between Hagler, Hearns, some of those great fights. Those are that type of skills that are out there, of the age that can perform like that and they have it all out there, the incentives are there. And then we hope the atmosphere helps create that and so you add all that up and we should have a great event. It’s one you shouldn’t miss.”

Jerry continued, “I’m more fan of some sports than others but when I get a chance to see a match that is such as the Open golf match they had there Sunday, when I see something that is rare it sends a chill up me, it’s worth seeing. I got to watch the Triple Crown, I was at Belmont to watch the Triple Crown. I went up there specifically so I can send a chill up my spine. I’m a horse racing fan, but I don’t go to the races that much.”

Jones ever the promoter, is always looking to what’s next. He could even envision Manny Pacquiao coming back.

“Yes, yes very much, very much. It’s there and Bob knows very much how we feel and would welcome a fight.”

On the possibility of Pacquiao fighting Canelo at his home.

“Now that would be something to behold.”