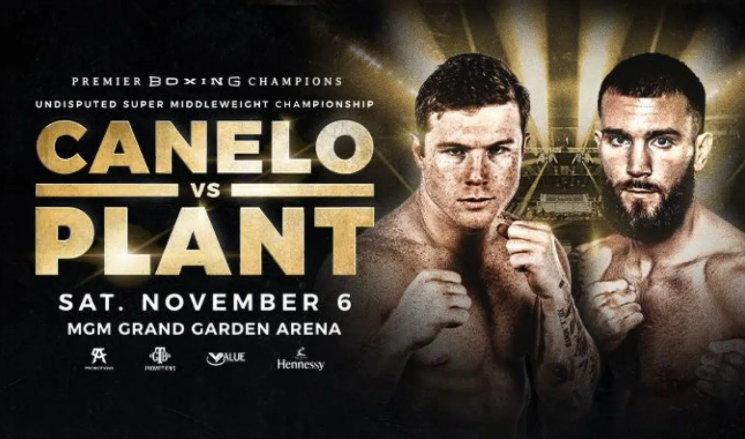 Canelo, a four-division world champion, will look to capture undisputed status for the first time in his Hall of Fame-caliber career as he returns to SHOWTIME where he made his pay-per-view main event debut in September 2013. The unbeaten and supremely talented Plant attempts to earn a career-defining victory and keep his perfect record intact as he makes his fourth world title defense. The winner of the November 6 bout will stamp his name in the history books as the first undisputed 168-pound world champion of the four-belt era.

“This is the most highly anticipated fight of the year and rightfully so,’’ said Tom Brown, President of TGB Promotions. “Canelo Álvarez has proven to be one of the best boxers in the sport today and he is seeking to become the first ever undisputed super middleweight champion. And Caleb Plant, who is a skilled technician in the ring and extremely confident in his abilities, wants to make history and not become a footnote. Both men will bring fire and determination into the ring and the eyes of the sports world will be focused on the action at MGM Grand on the evening of November 6.’’

“We are very happy to have been able to reach an agreement for this fight as we look to make history in becoming the first undisputed champion of Mexico or Latin America, and just the sixth man in the history of boxing,” said Canelo’s manager Eddy Reynoso. “We are going to train very hard, focus on growing the sport of boxing and plan to lift up the name of Mexico.”

“In one of our most prolific years to date, SHOWTIME has delivered 17 live boxing events in 2021 so far with several more to come. None more significant, however, than November 6,” said Stephen Espinoza, President, SHOWTIME Sports. “We are proud to welcome Canelo Álvarez back to SHOWTIME, now as the consensus No. 1 pound-for-pound fighter in the world and the sport’s biggest draw. We also welcome undefeated world champion Caleb Plant to the network as both men chase a historic, undisputed world title in the most anticipated fight of the year.”

Tickets for the live event are on sale now and can be purchased at AXS.com. The event is promoted by Canelo Promotions and TGB Promotions and sponsored by Hennessy and Value.

Having already captured world titles at 154, 160, 168 and 175-pounds, Canelo (56-1-2, 38 KOs) has amassed a Hall of Fame resume at just 31-years-old. The fighting pride of Guadalajara, Jalisco, Mexico, Canelo began his quest for the undisputed super middleweight championship in December 2020 by defeating then unbeaten Callum Smith to capture the WBA and WBC titles. Most recently, Canelo added the WBO belt via a stoppage victory over previously undefeated Billy Joe Saunders in May. November 6 will be Canelo’s first attempt at an undisputed title.

Under the guidance of Reynoso, his renowned coach, Canelo has faced and triumphed over a long list of elite fighters since turning pro at just 15-years-old in 2005. Shane Mosley, Gennadiy Golovkin, Erislandy Lara, Miguel Cotto and Sergey Kovalev are among them. Canelo’s lone professional defeat came against undefeated legend Floyd Mayweather in September 2013.

“At the end of the day, this is what I want to do with my career, make history,” said Canelo. “These things, like becoming the first to be the unified champion at 168 pounds, is making history. To potentially be one of the few who holds this prestigious honor in any weight class makes me very happy. For my country, this would be a huge accomplishment. I want to be remembered as one of the greatest in the history of the sport.”

The 28-year-old Plant (21-0, 12 KOs) captured his world title and burst onto the 168-pound scene by defeating Jose Uzcategui in January 2019. Plant was the underdog coming into the Uzcategui fight. He quickly set the tone scoring two early knockdowns on his way to a clear unanimous decision victory. It was an emotional night for Plant, who had dedicated his championship win to the memory of his late daughter, Alia, who passed away in 2015.

A native of Ashland City, Tennessee, Plant now lives and trains in Las Vegas, guided by his trainer Justin Gamber, along with his father and co-trainer Richie Plant. Caleb has successfully defended his title three times, dominating Mike Lee to earn a third-round stoppage at the MGM Grand Garden Arena in July 2019. He then earned a TKO victory over Vincent Feigenbutz in a homecoming bout in Nashville in 2020. Most recently, Plant bested former super middleweight world champion Caleb Truax, winning a unanimous decision in their January clash.

“On November 6, the world will witness boxing’s first ever crowned undisputed super middleweight champion,” said Plant. “When my hand is raised in victory, the world will know then, that I’m the new face of boxing. Everyone should order the PPV now and get their popcorn ready, because I’m about to put on a performance that will go down in history as one of the best ever. This man is in trouble.”