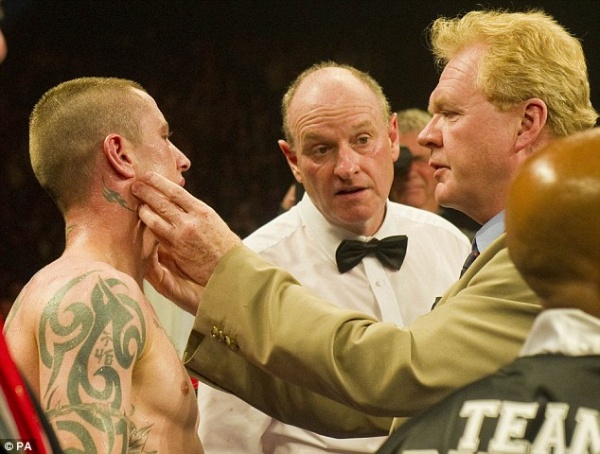 Ricky Burns will fight again despite breaking his jaw during the controversial draw with Raymundo Beltran on Saturday.

His promoter Eddie Hearn had said that the 30-year-old Scot’s future was in doubt and that he may never box again.

But Burns’ manager Alex Morrison is sure the WBO lightweight world champion will make a comeback.

‘I spoke to him this morning and he is definitely coming back, although when that will be, we don’t know.’

Many onlookers and pundits believe the 32-year-old Mexican Beltran had won the fight.

Burns had to have titanium plates inserted on to his jaw after suffering the injury in the second round, though he did continue through the full 12 rounds. Painful: Eddie Hearn tweeted this picture of Ricky Burns with his swollen jaw in hospital

Morrisson also believes Burns owes Beltran another shot at the title, and even said Burns is keen for a rematch.

‘It’s the moral thing to do,’ he said. ‘Ricky wants to fight him again here in Scotland in front of another packed crowd.

‘But it will only take place here in Scotland. If Beltran wants a rematch, he’ll have to come here again.’

‘Everyone’s talking about his next move. I can’t even guarantee he’ll box again at the moment,’ Hearn told the BBC.

‘It was a horrific injury to suffer. There have been a few occasions when people have boxed on with broken jaws – I couldn’t imagine anything worse – but they are extraordinary people, fighters, and he found the bravery to carry on.

‘The doctor, who doesn’t know a lot about boxing, was quite astonished when I told him he had boxed for half an hour with a broken jaw.

‘He asked if he had taken any shots on it and I told him that was the understatement of the year.

‘When I spoke to Beltran last night, he said he could hear him almost crying in clinches where the heads were going in on the jaw – unpleasant stuff, but he’s on the mend.’