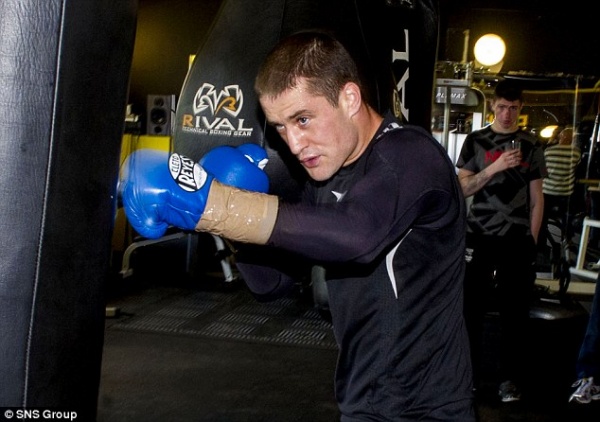 Ricky Burns believes that his last fight, against Jose Gonzalez, produced the ‘worst round’ of his career but insists that he will be fully prepared for Raymundo Beltran in the knowledge that he is unlikely to resist a brawl.

The WBO lightweight champion was in many ways fortunate to survive what was a difficult title defence against Gonzalez in May when the challenger retired after the ninth round with a wrist injury.

Burns is adamant, however, that he has learnt from that experience and will therefore not allow himself to become impatient or to repeat the same mistakes. Fully prepared: Ricky Burns insists he will not be slipping up against Raymundo Beltran

‘I think when I watched that fight back, from the second round onwards you could see I was getting picked off and I was trying to force the fight. I was lunging in,’ he told Sky Sports.

‘I was getting caught with punches I shouldn’t of, which I shouldn’t have been doing. It’s alright saying it now that I’ve watched it back, but when you are in there, that’s when I should have clicked.

‘I enjoy the occasion, especially fighting in Glasgow it’s fantastic.

Talented: The Scot also says he will be putting the ‘worst round’ of his career behind him

‘(But) that last fight, the seventh round, I think that was the worst round in my whole boxing career. It’s the only time I have noticed the fans lift the roof off the place.

‘That’s the first time I paid attention to it.’

Saturday’s fight at Glasgow’s Scottish Exhibition Centre is Burns’ fourth defence of his world title, while his Mexican opponent fights at world-level for the first time. Beltran has spoken of his hunger and determination to beat the Scot but Burns is the classier fighter and says he has concentrated on the fundamentals in order to be fully prepared. Close relationship: Burns is fighting for the second time since teaming up with Eddie Hearn Determined opponent: Mexico’s Raymundo Beltran is fighting for a world title for the first time

‘We went back to basics a bit for this fight, we went back to boxing, but knowing me there is always a time when I’m going to be dragged into a fight,’ he said.

‘I don’t know what way I’m going to take this guy on Saturday night, one round at a time, but if it’s going to be toe-to-toe for 12 rounds, then I’m up for that.’

Over the course of 34 fights, Beltran has lost six and won 28.

Burns has suffered only two defeats in 38, the last of those against Carl Johanneson in 2007.