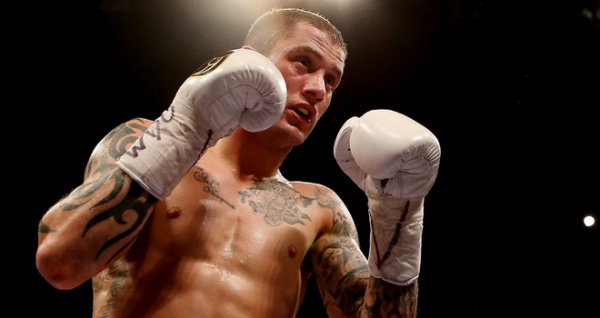 Burns Prepared To Dig Deep, Battle Back With Beltran WBO lightweight champion Ricky Burns insists there is no chance of fatherhood turning him soft.

The 30-year-old’s wife Amanda gave birth to an as yet unnamed baby boy last week amid his preparations for the fourth defence of his title against Raymundo Beltran at the SECC in Glasgow on Saturday night.

Before Tuesday’s press conference at the Fighting Scots Gym in Mossend, Lanarkshire, promoter Eddie Hearn joked that he had warned Burns not to let the emotions of fatherhood affect his mindset against the Mexican.

When asked if that was a possibility, the Coatbridge fighter said: “No, not at all. Boxing is my job, that is the way I look at it.

“Come Saturday night I know what I need to go out and do.

“First I need to win and then put on good performance, better than the last one.

“The last two or three months has been a nightmare.

“Moving house with the baby on its way, while trying to train for this fight.

“Amanda went into labour four o’clock on the Monday morning and didn’t have the baby until the Thursday morning, so she was in a while.

“It was just a nightmare but it is all done now so all my focus is on Saturday night.”

Burns’ desire to “do better than the last one” was a reference to his fight against Jose Gonzalez in May.

The impressive Puerto Rican challenger was ahead on points at the Emirates Arena in Glasgow but retired at the end of the ninth round with a damaged left hand.

“You are not always going to get it your own way in fights,” said Burns.

“But a champion shows that he can dig in and that’s what I done and got the win, which is the most important thing.

“Gonzalez was very good. At one point I felt my leg going a bit and that’s when he pounced on me, had me on the ropes and was unloading on me.

“But I came back with own punches. It is not in me to give in.

“I have always said that if I am going out I will go out swinging and when I caught him in the seventh that’s when the crowd took the roof off.

“But you learn from those fights. With Beltran, I don’t think I will have to go looking for him.

“He hasn’t come over here for nothing and he has not been one of the chief sparring partners of Manny Pacquiao for nothing.

“I know I am going to have to bring my A-game.

“He likes to get involved in a bit of a war but that doesn’t bother me.

“There will be times when In have to dig deep and stand my ground.

“Hopefully I will keep to my boxing but we will wait and see.”