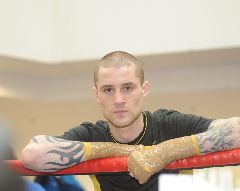 World Boxing Organization (WBO) World Lightweight Champion Ricky Burns and challenger Kevin Mitchell may be good friends, but that isn’t stopping them promise to put on one of the most brutal fights in recent years.

The pair clash in the big domestic showdown on Saturday 22nd September at the SECC in Glasgow, live and exclusive on the home of TV boxing BoxNation (Sky Ch. 437/Virgin Ch. 546).

Two-time and two-weight world champion Burns will put friendship aside and be ruthless in the fight, “Come fight night once we step into the ring the friendship is over, this is business time,” he said.

Cockney scrapper Mitchell is looking to finally win the world title and is confident he can beat his friend, “You can’t beat Ricky’s personality, he’s a lovely man and a mate of mine. We genuinely get on well and there won’t be any trash talking. But once we get in the ring we fight, that’s our job. I’ve wanted this fight for a long time now and Ricky has given me the chance. I’m determined to win it, but I know I’m in for a hard night’s work.”

Here are some more boxers who have put fighting before friendship:

In the build up to their ‘Battle of Britain’ in December 2000, Joe Calzaghe and Richie Woodhall stopped off for a cup of tea at a motorway service station in-between press conferences. The fight was made harder as their fathers and trainers Enzo and Len were also good friends. That didn’t stop WBO World Super-Middleweight Champion Calzaghe putting on a vicious performance to stop Woodhall in the 10th round of an exciting battle at the Sheffield Arena.

Before Kevin Mitchell’s mouthwatering domestic lightweight clash with rival John Murray in July last year, he said that he and Murray were good mates from their amateur days and came close to fighting then. They eventually met as pros at the Liverpool Echo Arena with Mitchell putting on his best ever performance to stop the previously unbeaten Murray in the eighth round to win the WBO Intercontinental Lightweight title.