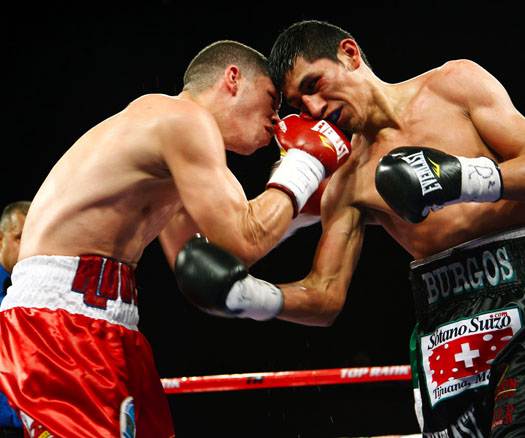 J.C. Burgos, Roman Martinez fight to a 12-round draw

Roman ‘Rocky’ Martinez and Juan Carlos Burgos fought to a 12-round draw in their HBO-televised opener Saturday evening at Madison Square Garden’s The Theatre in New York City.

Burgos was hell-bent on coming up aces in his second crack at a major title. Next month will mark 10 years since his uncle, Victor Burgos won his lone title with a points win over Alex ‘Nene’ Sanchez. This particular matchup of Mexico versus Puerto Rico once again seemed to favor the red, white and green as Burgos delivered a masterful body attack throughout the fight.

Martinez enjoyed a mid-round surge after appearing to have fallen behind early. The defending titlist was generally the busier fighter for much of the night, though Burgos often landing the far more telling blows. Martinez took advantage of his opponent’s modest punch output in the middle rounds, with that very workrate creating disparity among the judges’ scorecards.

A late fight surge by Burgos seemed to be enough to seal the deal. His corner left nothing to chance, telling the challenger he was losing heading into the final round.

Whether they believed their own advice or were just trying to hype up their fighter, it proved to be accurate. It’s debatable if he even took the final frame, as Martinez’ superior workrate was enough to punch his way to a draw and at least one more fight as a reigning titlist.

Martinez now moves to 26-1-2 (16KO) after the first successful defense of the belt he captured last September in a vacant title win over Miguel Beltran.

Burgos comes up just short in his second try at a major title. His record now stands to 30-1-1 (20KO). His previous attempt at a belt saw the Mexican come up short in a vacant featherweight title fight loss to Hozumi Hasegawa in November ’10.

Both fighters made their HBO-televised debut.