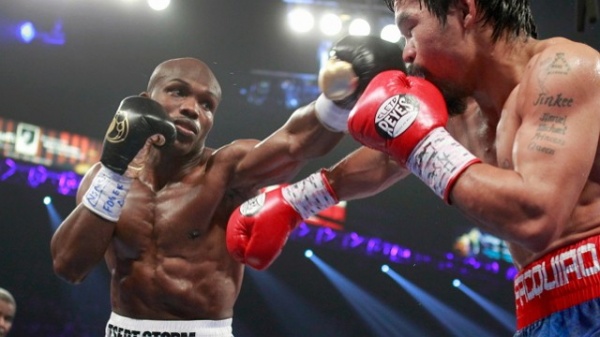 Bradley Willing To Go Toe To Toe With Marquez To Win Reigning WBO welterweight champion Timothy “Desert Storm” Bradley waged a memorable war with tough Siberian contender Ruslan Provodnikov this past March in Carson, CA.  Bradley stood his ground and traded with the powerful puncher, getting hurt on several occasions throughout the fight.  The Southern California based fighter showed tremendous heart in withstanding the assault and ended up coming out on top in one of the leading “Fight of the Year” candidates.

The soon to be 30-year-old fighter is now scheduled to face Mexican icon Juan Manuel Marquez on October 12th in Las Vegas, NV.  On the most recent edition of BoxingScene Radio, Bradley told us that he thinks that we are in for another war when he steps in the ring with Marquez.

“You know what, I think that this fight is going to end up that way.  I am willing to do whatever it takes to win this fight.  If I need to go toe to toe that’s what I will do.  I know Marquez likes to engage.  He’s a dog in there and I am willing to weather the storm to get the win,” Bradley revealed.

Eyebrows were raised when Bradley turned down a rematch against former 8 division champion Manny Pacquiao.  Bradley created plenty of new opportunities after his gritty performance against Provodnikov set the boxing world abuzz this spring.  He said that a Pacquiao rematch wasn’t the only lucrative option available to him.

“It was really easy man (to fight Marquez instead of Pacquiao).  I have already been down that road, especially after the Provodnikov fight.  A new door opened.  The lights are brighter on my end after like you said, a ‘Fight of the Year candidate’,” Bradley told BoxingScene Radio.

Bradley did however say that he does want a rematch with the Filipino superstar and that part of his reasoning for facing Marquez is that the aging Mexican fighter probably won’t be in the sport for too much longer. He wants to add Marquez’s name to his ledger and then will look at facing Pacquiao in the near future.

“Pacquiao and I definitely will have to get back in the ring sooner or later but I wanted this fight to add to my legacy before Marquez leaves the game.  He is almost 40 years old and may not have much time left.  He is motivated.  He wants to be the first Mexican fighter to win titles in 5 different weight classes.  He’s hungry and I am hungry.  It is going to be one hell of a fight,” Bradley stated.

You can listen to the show in its entirety by clicking here:http://tobtr.com/s/5031259