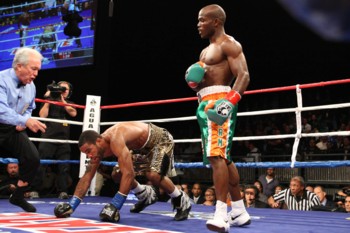 Bradley: Peterson needs to let Khan whine and suffer, and fight me instead WBO light welterweight champion Timothy Bradley (28-0, 12 KO’s) thinks Lamont Peterson (30-1-1, 15 KO’s) needs to let Amir Khan cry and suffer a while before facing him again. Instead, Bradley thinks Peterson should fight him next before facing Khan in a rematch.

Bradley told RingTV “I think he [Peterson] needs to leave Amir alone for a while and let him whine a little bit and let him feel it, because you know Amir don’t give nobody a rematch. I think that Lamont Peterson should come and see Tim Bradley, man and get some revenge.”

hat sounds like a good idea, because Khan will still want to fight Peterson again whether he loses to Bradley or not. Peterson could get two title fights under his belt instead of just one. If he loses to Khan, then a Bradley fight will likely not happen. It might be a better option to take a payday fight against Bradley, if Peterson believes he can truly beat him this time. As soundly as Bradley defeated Peterson two years ago, I’m not so certain that Peterson would do any better in a rematch. Bradley really his number in that fight and hurt him on a couple of occasions.

Bradley is right about Khan not giving rematches to guys that he head. He doesn’t do it. Khan didn’t even do it when he was destroyed in one round by Breidis Prescott in 2008. Peterson is obviously a different story for Khan, because he can’t punch like Prescott, and is thus a less dangerous option.

Bradley signed with Top Rank recently and fought for the first time for them last month, stopping 40-year-old Joel Casamayor in the 8th round. Top Rank promoter Bob Arum is grooming Bradley for a big money in house fight against WBO welterweight champion Manny Pacquiao in the near future.