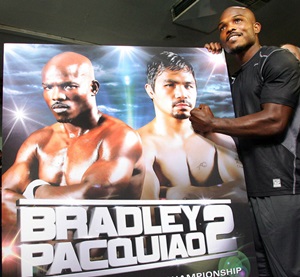 Bradley: Pacquiao Will Be Easier Second Time Around WBO welterweight champion Timothy Bradley (31-0, 12KOs) is relishing the opportunity to make things right on April 12th at the MGM Grand in Las Vegas, when he takes on Manny Pacquiao in a rematch of their controversial June 2012 clash. Bradley won the first meeting, with a controversial split decision victory.

Their mutual promoter, Bob Arum of Top Rank, was so irate over the scoring that he contacted the Nevada State Attorney General to conduct an investigation.

Since their fight, Bradley won a Fight of The Year battle with Ruslan Provodnikov and a twelve round split decision over Juan Manuel Marquez. Pacquiao was knocked out cold by Marquez in the sixth round of their fourth fight in December 2012 and then returned to outclass Brandon Rios over twelve rounds in November of last year.

“Now I’m not the little dog on the block. I’m a top dog,” Bradley said to his hometown paper The Desert Sun. “I’m a lot more mature as a fighter, as a man. I’m a little older, Pacquiao is a little older, so it’s different. I’ve had some great wins in those two years and I feel I’m more than ready.

“It’s almost like I spar someone the first time. OK, you get a few shots. The second time, it’s much easier, because I know what to expect. Pacquiao can say the same thing about me. But Pacquiao only fights one-way guys. Only one way, and that’s the Pacquiao way.”

“I think Manny Pacquiao will get aggressive until he gets hit. People are going to laugh about this, and it’s OK, they can laugh. But like I said, if I was a non-puncher, if I didn’t have anything, guys would walk completely straight through me.”