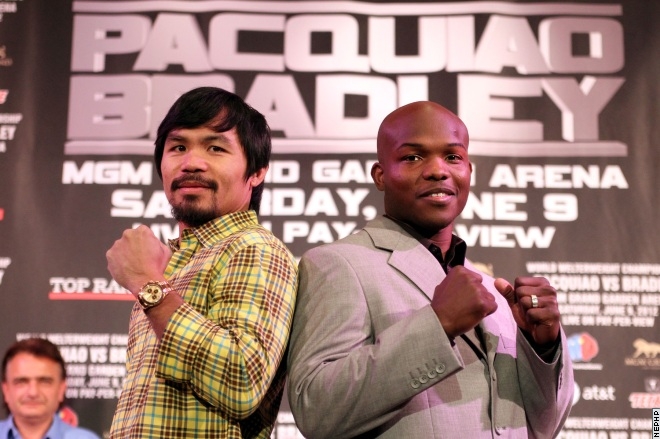 Bradley: Not in Awe of Pacquiao, My Best Will Come Out Timothy Bradley isn’t the slightest bit intimidated as he prepares to begin the harder portions of training camp for the biggest fight of his career.

Bradley realizes how upsetting Manny Pacquiao could completely change his life, but the unbeaten junior welterweight champion will take the same aggressive approach to this training camp that this tireless worker usually takes.

“It doesn’t matter,” Bradley said. “Manny Pacquiao is the biggest name in boxing, next to Floyd Mayweather. But it’s a name. He’s a fighter. He’s a human being. He has skill; I have skill.

“I’m not like in awe when I see Manny Pacquiao. It’s another fight to me. Take away all the cameras, all the attention, the media, put us in the ring and it’s a fight. It’s a fight to me.”

Bradley expects, though, that facing an opponent as good as Pacquiao (54-3-2, 38 KOs) will enable him to put on a special performance in their 12-round fight June 9 in Las Vegas for Pacquiao’s WBO welterweight title.

“One of the problems I always have with my trainer [Joel Diaz],” Bradley said, “is he always says, ‘Why do you fight to the level of your opposition? I know you can do more. I know you can get this guy out of here a lot sooner than that.’ I say, ‘I really don’t know why.’ But [for] Manny Pacquiao, I’m going to have to bring my ‘A’ game. It’s going to come out. It has to come out.”

Keith Idec covers boxing for The Record and Herald News, of Woodland Park, N.J., and BoxingScene.com.