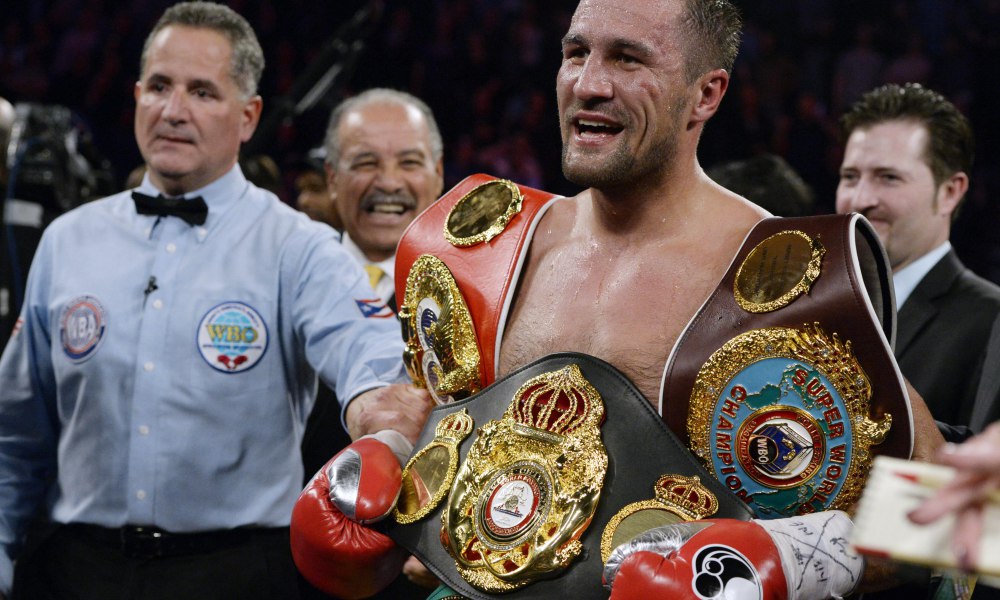 It’s not the Sergey Kovalev fight the masses want, but for now, it’s the fight they’re going to get. The Russian knockout artist will defend his IBF, WBA and WBO belts against mandatory challenger Nadjib Mohammedi at the Mandalay Bay Events Center on Saturday night. The card airs on HBO beginning at 10 p.m. ET/7 p.m. PT.

The relatively unknown Mohammedi is something of a letdown opponent for Kovalev, who is coming off significant triumphs over Jean Pascal and Bernard Hopkins in his last two outings. It’s no secret that Kovalev eventually wants a title unification bout against Adonis Stevenson, but Stevenson’s current alliance with Showtime makes that matchup unrealistic at the moment. In the meantime, the bout with Mohammedi could serve as another addition to Kovalev’s highlight reel.

The Matchup: Kovalev is a devastating power puncher who has knocked out 10 of his last 11 foes. Only Bernard Hopkins was able to make it to the final bell against “Krusher” during that time, and even he was knocked down twice en route to losing a lopsided decision. In March, Pascal displayed admirable toughness after being dropped for the first time in his career in the third round, but he eventually succumbed to a pair of Kovalev right hands in the eighth round. While Pascal was able to find success at times with unorthodox defensive movement and counters, he was ultimately overwhelmed, as Kovalev outlanded him 122 to 68.

The Los Angeles-based Kovalev possesses knockout power in both hands and is most dangerous when he is allowed to establish a rhythm with consistent forward movement. If he can get an opponent to retreat, he is more likely to connect with a fight-altering blow than if that foe elects to stand in the pocket. Once he gets rolling, Kovalev’s combination punching, while not especially diverse, is a sight to behold as he moves forward against a fighter on the defensive. Kovalev is capable of landing punches even if he can’t get his adversary moving backward, but without the proper distance they lack the impact they might otherwise have had.

Kovalev sets everything up with a fundamentally sound jab, and he is effective landing it to both the head and body. He will often start with probing lefts until he senses an opening, and then he will double up on his jab and follow with a hard straight right. If his opponent reacts the way Kovalev wants and gets on his bicycle, Kovalev can quickly transform into a whirlwind of destruction. However, he does have a tendency to get off balance and out of position when he throws his combinations, which could potentially leave him open to counters. Kovalev showed improvement in this area against Hopkins, as he fought with more patience when he was unable to secure a finish.

One of the most popular storylines surrounding Mohammedi is that he will have Abel Sanchez in his corner. Sanchez used to train Kovalev and currently works with middleweight champion Gennady Golovkin. While Sanchez might be able to provide Mohammedi with some useful insight regarding his former charge, the fact remains that the 30-year-old Frenchman is a middle-tier light heavyweight at best. He become the No. 1 contender with a mild upset of Anatloliy Dudchenko in June 2014 and enters the bout on a 13-fight winning streak, but his resume is not as strong as Kovalev’s.

In two of his three losses, Mohammedi was stopped inside of two rounds, and he hasn’t faced anyone with the KO power of Kovalev. When one is accustomed to being the harder puncher, it can be a shock when someone as dangerous as Kovalev connects. To remain competitive, Mohammedi needs to return fire immediately when Kovalev attacks, because the Russian can falter when his rhythm is disrupted. That said, while Kovalev prefers to lead, he is improving as a counterpuncher and will capitalize if Mohammedi becomes careless.

The Pick: This sets up as a showcase fight for Kovalev, who is bigger, faster and more skilled. Heart, tenacity and a sound game plan will help Mohammedi’s cause, but in the end he will meet a fate familiar to many a Kovalev foe. Kovalev by KO/TKO within five rounds.