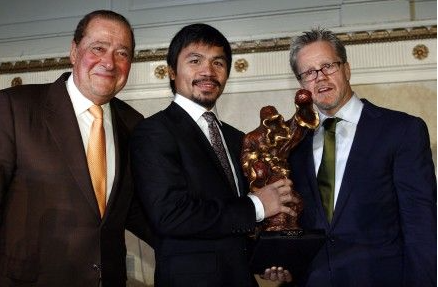 Veteran promoter Bob Arum is now looking for Manny Pacquiao’s next foe ahead of his impending decision to continue fighting after he gets his job in the senate sorted out to give way for an eight-week training camp to culminate in October planned fight.

In an exclusive interview with Boxing Scene, Arum said he is awaiting Pacquiao’s decision and once he gets a positive feedback he will immediately fly to Manila to make arrangement for Pacquiao’s comeback fight in October this year.

Pacquiao has announced his retirement from boxing right after his trilogy fight against Timothy Bradley last April 9 but he did not discount the possibility of coming back for one or two more fights.

Pacquiao was sworn-in as Philippine senator late this week after winning in the May 9 national elections garnering over 16 million votes to rank seventh in the Top 12 winning candidates.

“Well we gotta see. If he will fight this year, then he will fight next year. We are thinking about him fighting in October if he wants to fight. Once I get the opponent that I am working on – we are working on opponents and once I get that, I will fly over to the Philippines and he will see if his schedule in the senate allows him to train for a fight and participate in a fight.” Arum said.

“I know he wants to continue fighting but the impediment is how labor intensive his work as a Filipino senator is and he is not going to really know that for another week or so. He was just sworn in as a senator yesterday,” he added.

While Arum did not mention Floyd Mayweather as possible opponent in a rematch, he was vocal about Pacquiao facing Vasyl Lomachenko in 2017.

The 28-year-old Olympic gold medalist from Ukraine knocked out Roman Martinez last June 11 to bag the WBO Junior Lightweight title. Lomachenko has only seven pro fights to his credit but his amateur record is very impressive with 396 wins and only one loss.

Lomachenko is the latest hot find of Top Rank who has the potential of becoming a pay-per-view attraction because of his active and aggressive fighting style. There are similarities in the way Lomachenko and Pacquiao behave in the ring. Both of them are southpaws and with awesome power in their left hand. They are likewise noted for their hand and foot speed.

Arum believes Pacquiao will soon announce his decision to continue fighting which is the reason why he is now making a shortlist of Pacquiao’s next possible opponents.