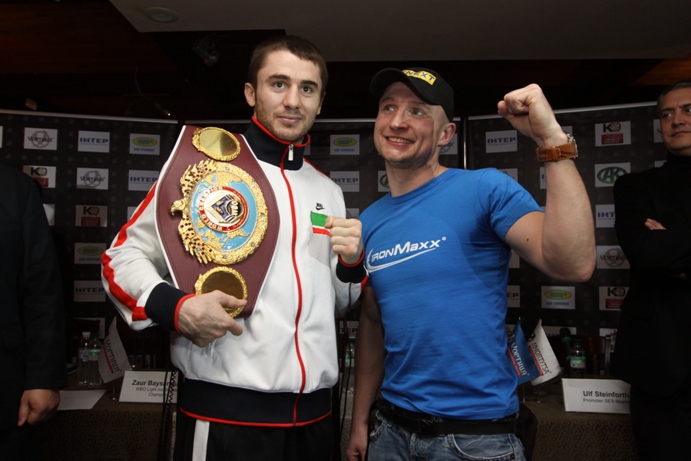 K2 Promotions of Klitschko brothers in associations with SES-Boxing of Ulf Steinforth begin the new season of boxing in Ukraine! WBO junior middleweight champion Zaurbek Baysangurov (26-1, 20 KOs) will defend his title in a match with Lukas Konecny (47-3, 22 KOs) on the 10th of March 10 in the Terminal Ice Palace, Brovary. The boxing event will be presented by Khortytsa TM and Inter Media Group. The fight promises to be an intriguing encounter, as the ring will be shared by two strongest representatives of the junior middleweight division. Baysangurov and Konecny have not lost since 2008. 26-years old Chechen Baysangurov of K2 Promotions debuted in professional ranks in 2004 and very soon gained the reputation of one of the hottest prospects in the division. The real triumph for Baysangurov became his victory over Mexican puncher Marco Antonio Rubio in 2006 in Kyiv. In 2007 Zaurbek won the European title and defended it two times. But in December 2008 young Chechen stumbled one step from world championship fight when lost by technical knockout to Cornelius Bundrage of United States. Shortly after defeat Zaur came back to the ring and scored seven consecutive victories, six of them by knockout, defeating such strong opponents as Eromosele Albert and Richard Gutierrez. In summer 2011 in Odessa, Ukraine, Baysangurov won interim WBO junior middleweight title with a quick victory in the first round over Brazilian Mike Miranda. Last fall WBO junior middleweight champion at the time Sergiy Dzinziruk was stripped of the title, as he has not fight in his division since May 2010 and due to the injury was forced to withdraw from the mandatory defense against Lukas Konecny. According to the decision of WBO Baysangurov was given the status of world champion in this weight, and was obligated to meet Lukas Konecny in his next fight. For the past six years 33-years old Konecny belongs to the elite of the junior middleweights and because of his achievements is the best fighter in the Czech boxing history regardless of weight categories. In 2008 Konecny fought for WBO world title against Sergiy Dzinziruk and lost by controversial majority decision. Since then, the Czech scored eleven wins in eleven battles, including winning the European belt and two successful defenses of this title. In the undercard boxing fans will be able to see another title fight when WBO and WBF middleweight champion Christine Hammer (11-0, 7 KOs) will defend her belts against Quinn Shabalaly (4-1-1, 1 KO) of South Africa.

К2 Promotions kicks off the new boxing year with the new partner! Since February 2012 Khortytsa TM – the absolute quality is the official partner of the boxing events promoted by Klitschko brothers’ promotional company in Ukraine.

Bosco Ukraine is a sports partner of the show!