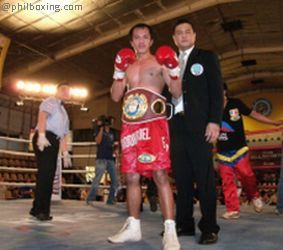 MANDALUYONG CITY – Fredirex Rodriguez of Bukidnon came out stronger than expected and knocked out the more accomplished Vincent ‘Popeye’ Palicte in the fifth round. After a probing opening round, Rodriguez started to land his hard hooks in the second. Palicte landed well placed one-two combinations and the fight remained competitive until a bizarre moment in the 5th where both boxers started holding and Palicte was tagged with a body blow and looked hurt as they wrestled each other to the canvas.

When they got up, Rodriguez found his opening and landed a solid right hook that sent Palicte crashing to the canvas. Referee Danrex Tapdasan reached the ten count at the 2:59 mark. 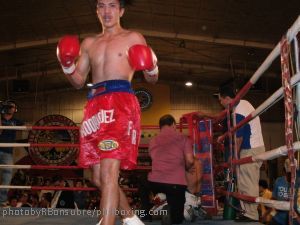 Palicte, who fights out of the Jason Soong Boxing Stable of Makati, drops to 14-4-1, 7 KO’s. He is a former WBC International champion while Rodriguez, who improves to 9-2-1, 7 KO’s, had lost two of his last three fights and previously failed in his attempts to win PBF and WBO Oriental belts.

Adones “The Undertaker” Cabalquinto tried to bury Jaypee Ignacio with hard hooks to the body and head but Ignacio kept fighting back with well-timed right hands. Cabalquinto’s edge in volume and aggressiveness was enough to sway the fight in his favour. The scores 98-92, 98-92 and 96-94.

Cabalquinto is the Philippine jr. welterweight champion but his title was not at stake in this fight.

The fight between Joebert Alvarez and Albert Alcoy ended in a technical draw. A clash of heads in round two inflicted a cut on Alvarez’ left eyebrow.Alcoy then landed a hard right that sent Alvarez down. When he got up, the referee signalled the ring doctor to check on his cut again; the ring physician recommended the stoppage and referee Noel Haduca halted the fight.

Alcoy’s corner loudly protested claiming their boxer had already an advantage after the knockdown.

Jerwin ‘Pretty Boy’ Ancajas beat John Mark Bautista by TKO in the fourth round. In the third, the southpaw Ancajas scored with left straights then fired a sharp left uppercut that wobbled Bautista.

Batuista’s cornermen decided not to let their boxer continue after the fourth round bell sounded.

Vincent’s brother, Aston Palicte, had better luck and won by TKO in 59 seconds of the opening round against Mark Joseph Costa. Aston knocked Costa down twice with sharp one-two combos.

Jerson Luzarito and Marzon Cabilla fought to a technical draw in the 4th round of a ten rounder. An accidental headbutt caused a deep cut on Cabilla’s scalp.

The event featured two pairs of female boxers – Carlean Rivas and Christine Latube fought to a split draw (40-36 Rivas, 39-37 Latube and 38-38) while Jessebelle Pagaduan won by TKO in the first round against Lady Love Sampiton.

The fights will be shown on a delayed basis on GMA TV.