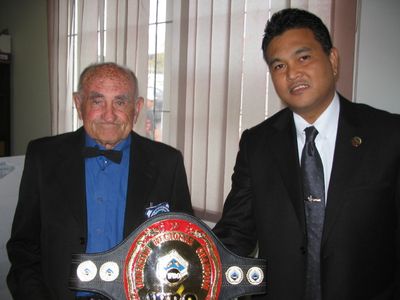 World Boxing Organization Asia Pacific vice president Leon
Panoncillo has given the WBO Convention in Puerto Rico a
bright report on the achievements of the regional
organization the past year.

The consensus at the Convention was that Panoncillo’s
efforts in the Asia Pacific region had been marked by
success through 2011 and it was considered a banner year in
terms of WBO regional titles with the Philippines playing a
prominent role along with Thailand. China is considered an
emerging force in the region.

Panoncillo announced that the WBO was staging three times
as many title fights as other regional boxing organizations
such as the Oriental Pacific Boxing Federation and the Pan
Asian Boxing Association and stated that this success
primarily due to the wholehearted support of the Philippines
and Thailand.

The WBO Asia Pacific vice president noted that the
organization is  continuing to grow and develop in the
Asia Pacific region. There have been indications this year
that Japan which previously recognized only the WBC and WBA
is changing its attitude towards the WBO

There was a total of some 59 championship fights in the
Asia Pacific region in 2011 with 21 WBO Oriental title
fights. Panoncillo revealed total revenues of $56,000.

The regional vice president said that many fighters were
benefiting from their support and involvement with the WBO
and that several Asian fighters who battled for regional
belts are moving up to fighting for and winning world
titles.

WBO president Francisco “Paco” Valcarcel was impressed with
Panoncillo’s performance that he appointed him as WBO
supervisor for the last title defense of welterweight
champion and pound for pound king Manny Pacquiao against
Shane Mosley.