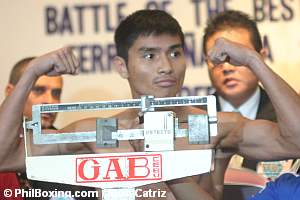 Known for having power in both hands Maraon stated, “It’s exciting to be represented by Gary Shaw Productions, one of the best promotional companies in boxing. My style is fun to watch because I like to knock out my opponent every time I step into the ring. I represent the Filipino nation with pride and would like to fight in the USA someday. I hope to be fighting for a world title in the near future.

Gary Shaw loves knockout artists and Maraon fit that mold. Shaw went on to say, “What we have here in Jundy Maraon is a fighter that loves to go see his opponent hit the canvas. He’s a tremendous talent and I see him fighting at the elite level someday. Right now I want to keep him busy while he learns his craft and bring him to the USA after a few more fights. I’m excited that he’s joined our stable of great young fighters. Our company is building its foundation on a global scale.”