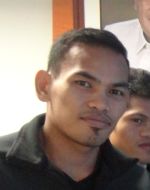 Their immediate concern is meeting the challenge of the camp of former Philippine lightweight champ Jay “Rapido” Solmiano (13-2-1, 9 KOs), who has been itching to put their boxer as the mandatory challenger for Cabalquinto’s domestic crown.

Reacting to comments that Cabalquinto can be beaten, Promoter Jimenez e-mailed this writer stating that Team Cabalquinto has issued a challenge to Solmiano to face him in a WBO Asia Pacific showdown in the 140-lb. division, instead of the Philippine championship that he is now holding.

(I am not in any way afraid of fighting Jay Solmiano. I will fight him anytime and anywhere. But to face a fellow Filipino prospect like me, I think it would be very rewarding for the winner to land in the world rankings. So, I believe its best that we fight for the WBO Asia Pacific belt.)

Cabalquinto knows that owning a WBO regional title would guarantee him a spot in the world rankings. The 25 year old Solmiano (13-2-1, 9 KOs) is from San Andres, Catanduanes and is a former Philippine lightweight champion. He is handled by the tandem of equally young boxing managers/promoters Ryan Gabriel and June Camille Razon Baltazar. The two southpaws are evenly matched physically.

Solmiano suffered 2 consecutive losses to Japanese Nihito Arakawa via split decision in an OPBF lightweight championship last October in Japan and to Rey Labao last March by a stunning 1st round TKO in their Philippine lightweight championship battle Cebu. Solmiano has bounced back from those losses by beating Thai Singdet Sithsaithong via 4th round KO last June 30 in Makati City and knocking out Alejandro Anas in the 2nd round last August 18 in Mandaluyong City.

Cabalquinto was an interested spectator inside the boxing venue when Solmiano beat Anas last weekend in Mandaluyong City.

Cabalquinto, who hails from Talaingod, Davao Del Norte, won the Philippine 140 lb division title in a ‘Fight of the Year’ candidate against the tough Dan Nazareno by unanimous decision at the Hoops Dome, Lapu-Lapu City, Cebu. This fight established Cabalquinto as one of the best 140 lb boxers in the country.

“He may have watched his next opponent if his wish to fight for a regional belt becomes a reality,”Jimenez said, “Now, it’s up to Jay Solmiano and his team to stand up and accept the challenge or instead look at another direction.”

Photo – Adones Cabalquinto (above) and his fight against Avelino Balleser (below) in Mabolo, Cebu City)