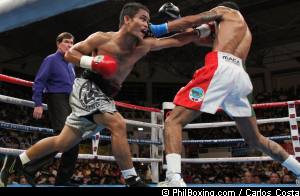 WBO Asia Pacific Bantamweight champion AJ “Bazooka” Banal of ALA Gym Philippines will be tested anew before his second world title shot of his career on the 24th of March at the Waterfront Cebu City Hotel and Casino.

Banal W 26 (KO 19) L 1 D 1 last fought October 8, 2011 in Bacolod City where he beat Mexican Mario Briones of Mexico via a 12 round UD beat down and will be facing another Mexican in Raul Hidalgo for his fourth defense of his WBO Asia Pacific Bantamweight title.

Hidalgo who sports a record of W 16 (KO 12) L 5 D 0 will be Banal’s last test before fighting for the WBO World Bantamweight title which rumor has it that current champ Jorge Arce will be vacating to challenge Nonito Donaire, Jr. of the Pilippines. Should this happen, Banal will possibly be in the clear to fight for a world championship this year.

Also to be featured in the undercard are promising undefeated Filipino fighters Prince Albert Pagara and Arthur Villanueva. OPBF Flyweight Champ Rocky Fuentes will likewise be in this exciting fight card.

Pinoy Pride 13 is a proud presentation of ALA Promotions and ABS CBN Sports gearing towards showcasing the Filipino fighters to the world.