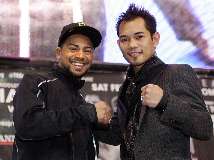 Arum Predicts Donaire-Vazquez Jr Will Be a Tremendous Fight 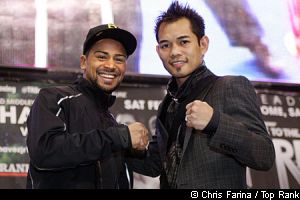 Top Rank promoter Bob Arum predicts the clash between Nonito “The Filipino Flash” Donaire and Wilfredo Vazquez Jr of Puerto Rico for the vacant WBO jr featherweight title at the Alamadome in San Antonio, Texas on February 4 “should be a tremendous fight.”

Donaire who won the WBO/WBC bantamweight title with a sensational 2nd round TKO over highly favored Mexican Fernando “Cochulito” Montiel on February 19, 2011 and then scored a shutout twelve round decision against two division world champion Omar Narvez of Argentina at The Theater of Madison Square Garden on October 22, 2011 has been training hard under Robert Garcia who warned that it won’t be an easy fight..

Donaire who is following the path laid out by eight division world champion and Ring Magazine pound for pound king Manny Pacquiao had earlier won the IBF flyweight title with a smashing 5th round demolition of Australia’s Vic Darchinyan and then captured the WBA super flyweight title with a twelve round unanimous decision over an overweight Rafael Concepcion on August 15, 2008 before sealing his title bid with an 8th round TKO of Mexico’s Hernan Marquez on July 10, 2011.

Coincidentally, it was on that same fight card in Puerto Rico that Vazquez Jr scored a 4th round knockout of former WBO super flyweight champion “Marvelous” Marvin Sonsona to win the 122 pound crown..

Arum noted that Vazquez who lost his title to Mexican warrior Jorge “Travieso” Arce was “beating Arce most of that fight but Arce caught him in the last round and knocked him out..”

He said “I think this fight (against Vazquez Jr) is going to be a big step for Nonito.”

Arum disclosed that should Donaire win he would look to arrange a fight against Arce and then WBC champion Toshiaki Nishioka of Japan. He said he plans to promote one of those two fights at the new Mall of Asia stadium and that HBO Sports had agreed to send a crew to the Philippines to cover the fight on a Sunday morning.

Arum said that based on the early ticket sales “we expect a huge crowd” since WBC middleweight champion Julio Cesaar Chavez Jr will defend his title against Marco Antonio Rubio “who can really punch and that should be a great fight.”

Chavez’ strength and conditioning coach Alex Ariza told the Manila Standard that he was “very happy with the way Chavez is coming along. He is working very hard because he knows that this is going to the fight that is going to take him to the super fights against Miguel Cotto, Antonio Margarito, Saul Alvarez.”