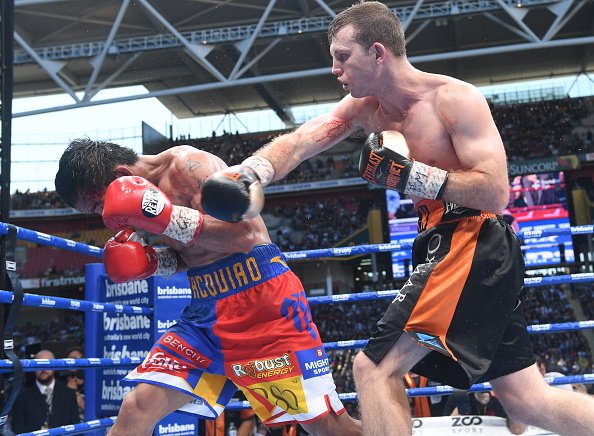 Horn, a 2012 Australian Olympian, pulled off a shocking upset with a twelve round unanimous decision over Pacquiao to capture the WBO welterweight championship – before a crowd of over 50,000 fans at the venue. Pacquiao admitted afterwards that he didn’t realize how tough Horn was.

Arum was angered by some of the pre-fight comments that were being made by Pacquiao’s handlers – who were calling Horn a “tuneup” opponent and gave him zero chance of winning.

Arum had warned them over and over that Horn was not a walkover opponent.

“As what happens when you go in overconfident and you know you have the morons in his corner saying that the only way Horn could win the fight is Manny trips his way to the ring. What kind of sh*t is that? I mean I saw the kid fight in New Zealand. I knew he was a competent fighter. I knew it would be a tough fight,” Arum said to News To Go.

Pacquiao intends to exercise a rematch clause. Arum is not going to force the issue on him.

“If Manny wants a rematch, I would do it. But I am not advocating a rematch. That’s up to Manny,” Arum said.

There were many observers who felt the outcome was controversial, with Pacquiao being robbed of a win.

Arum disagrees with the public outcry. He felt the contest was very close and far from a robbery.

“It was a close fight. It could have gone either way. A couple of close rounds, but you can’t argue with the result,” Arum said.