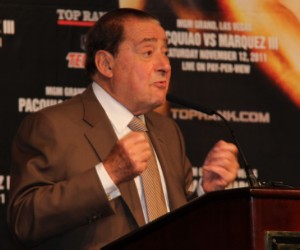 Arum: Marquez Will Fight Gesta, Rios or Alvarado Next Undefeated Filipino southpaw Mercito “No Mercy” Gesta is among three fighters being considered as an opponent for a fight against four-division world champion Juan Manuel Marquez on July 14 at the Dallas Cowboys Stadium in Texas.

Top Rank promoter Bob Arum told BoxingScene.com/Manila Standard that Gesta “looked very, very good (against Oscar Cuero over whom he won by an 8th round TKO ) and he will probably fight on July 14 on our card in Cowboy Stadium.”

Responding to Marquez himself who  fueled speculation about a possible Gesta fight when he announced after a unanimous decision over victory over Sergey Fedchenko to grab the WBO junior welterweight interim title,  that he would fight a lefty next on July 14 in Texas, Arum said “Marquez will either fight (Brandon) Rios, Gesta or (Mike) Alvarado.”

Gesta’s trainer and co-manager Vince  Parra said Gesta’s team was set to discuss his July 14 fight with Top Rank and said “we are looking at a significant step up” and that Marquez was a possibility although no decisions have been made.

Reacting to the comments of TV announcers Rich Marotta and former world champion Raul Marquez that Gesta needs a couple of fights before eyeing champions such as Marquez who his an excellent counter-puncher, Parra said “styles make fights but whether it’s the next fight or the fight after I expect him to do well.”

He said Gesta would take a few days break and return to the gym in San Diego to get ready for his next fight no matter who the opponent is.

The TV commentators said Gesta “showed a little bit of everything – speed, explosive power, good footwork” and the ability to switch from his regular southpaw stance to orthodox.

However, Marotta and Marquez said Gesta needs to work on his defense and although Marotta said it was “a nice performance” they  both felt he is not yet ready for a world title fight.

Top Rank president Todd DuBoef had earlier told Bev Llorente of ABS-CBN in Las Vegas “Gesta is a terrific fight, I think he’s knocking on the title’s door” while boxingscene.com editor Rick Reeno added Gesta is “an aggressive fighter nwho is always looking to fight. He likes to come forward and he certainly has a shot in the lightweight division of getting a world title. A lot of the lightweights are moving up and it leaves a door wide open for him.”