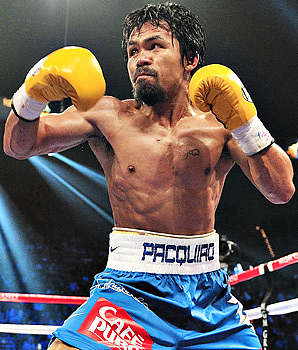 In an interview with BoxingScene.com, Manila Standard and Dyan Castillejo of ABS-CBN, Arum said “we will sit down and try to thresh everything out and then Manny will be contacted in the Philippines and hopefully we will be able to make an announcement on Tuesday which is two days after the Super Bowl.”

The 28 year old Bradley has a record of 28-0 with 12 knockouts and will be coming off an 8th round TKO over former world champion Joel Casamayor last November 12, 2011. Bradley’s manager Dunkin who also handles Nonito “The Filipino Flash” Donaire told us he expects the Pacquiao-Bradley fight to push through even as Floyd Mayweather Jr announced he would fight 154 pound champ Miguel Cotto on May 5 at the MGM Grand Garden Arena in Las Vegas.

Mayweather made the announcement after the Nevada State Athletic Commission issued the fighter a conditional, one-fight license warning him he had to go to prison to begin serving a 90 day sentence on June 1 and had to stay out of trouble.

Arum said the Mayweather situation “is really bizarre, its really sad because its making a circus of boxing. Its obvious to anybody who has looked at this, that the fight isn’t happening because of Mayweather. For two years one thing was in stone — that was a 50-50 deal and now Mayweather has departed from it and thats ridiculous. Hopefully when our fight is set in June, his fight is now set for May, we will sit down sensibly without a lot of pressure and plan a fight if both (Pacquiao and Mayweather) are successful for November, hopefully.”

However, Arum cautioned “with these birds there is  no rational kind of thing. I know what Mayweather is up to. He’s trying to get some investor to put up a tremendous amount of money, pay Manny a fraction of that and keep the rest to himself. But I’ve been in this game too long to let that happen.”

Responding to Mayweather’s offer of $40 million to Pacquiao while he retains all the ay-per-view and other ancillary income Arum made a counter-offer of a guaranteed $50 million and said “its a no brainer. I’d give him $50 million in two seconds because each of these guys (Pacquiao and Mayweather) is going to make a lot more than $50 million once we get the fight on. I believe the fight will do about 3 million pay-per-view homes in the United States and Canada and the gate is going to be tremendous.”

The Top Rank promoter also revealed that he and DuBeof had spoken to the MGM people who told him that they want to do an outdoor stadium where the Mandalay Bay Convention Center is. Arum noted “there is plenty of room to put the outdoor stadium up and you use that tremendously large convention center for a boxing experience so that people can come and see the old boxing memorabilia, films and everything. Its great for boxing and the press will have great accommodations and its all working but nobody is going to spend the money to put up an outdoor stadium unless they know there is going to be a fight.”