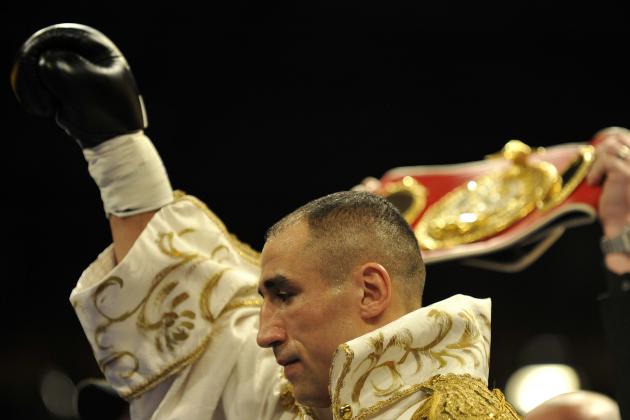 WBO super middleweight champion Arthur Abraham put a period on the end of the following sentence on Saturday in Germany: “Arthur Abraham is better than Robert Stieglitz.”

With an emphatic sixth-round KO in their fourth meeting, Abraham left no doubt which man holds sway in the long rivalry. He dropped Stieglitz with a hard right hand, and his opponent’s corner showed the towel, signaling the surrender.

Here’s a look at the sequence in a tweet from Only Full Fights:

Before being floored for good in the sixth, Stieglitz also hit the canvas in the fourth round. Abraham has beaten his compatriot and former champion in three of four fights now, but none of the previous victories were as definitive as this one.

Abraham was the aggressor for most of the fight, as his opponent looked out of sorts. Stieglitz moved as if he lacked energy and motivation. This fight was clearly lacking the energy and competitiveness that had made spots of the previous three fights compelling.

Many members of the boxing community seemed relieved to see the Abraham-Stieglitz saga come to an apparent end. TalkinBoxing‘s take was just one example:

At 34 years old and with his skills clearly declining, Stieglitz has to ask himself if this should be the end of the road.

He rarely fought outside of his native Germany. He and Abraham passed the WBO super middleweight championship back and forth the better part of three years. If Stieglitz stops fighting, he won’t go down as one of the best 168-pounders of his era, but he has had a nice career.

Abraham has fought far better competition. He’s beaten Edison Miranda twice and former champions Jermain Taylor and Raul Marquez. The Armenian-born champion is now 35 years old and has shown no willingness to venture outside of his adopted home of Germany to defend his title.

In fact, the last time he fought anywhere besides Germany was in 2011 when Andre Ward outclassed him in the 168-pound Super Six Tournament.

For years Abraham and Stieglitz have competed largely in a bubble. After Saturday’s decisive end to their rivalry, one of their bubbles has burst, and it’s time for the next chapter in both fighters’ careers.

We’ll see which direction they go in the coming months.