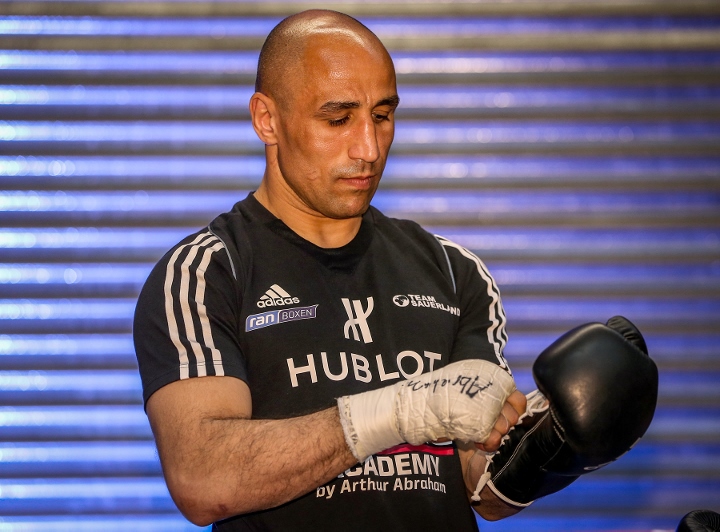 At age 36 and now a three-time former champion, Arthur Abraham insists there is plenty of air left in his tires.

The recently dethroned super middleweight titlist took some well-deserved time off following his 12-round points loss to unbeaten Gilberto Ramirez in April, but is now ready to return for at least one more title run. The first step in pursuing that goal will come July 16, when Abraham will appear in the chief support at the famed Max-Schmeling-Halle in Berlin, Germany.

His placement on the show comes on the heels of the recent announcement of another bout of interest to the super middleweight division. Italy’s Giovanni De Carolis makes the first defense of his version of the 168-pound crown as he faces Tyron Zeuge in the main event.

“I’m not ready to say goodbye to the sport I love so much,” Abraham (44-5, 29KOs) said in a statement released through the press office of Team Sauerland, his career-long promoter. “The fight with Ramirez did not go as planned, but I promise this will not happen again. I will show that I can do better and that I can become World Champion again – that is my greatest wish!”

An opponent has yet to be secured for his first fight home since dropping a lopsided decision to Ramirez in Las Vegas.

Ramirez made history in becoming the first boxer from Mexico to claim a piece of the super middleweight crown. The fact that Abraham landed on the wrong end of that piece of trivia was less concerning than the manner in which he conceded the crown.

“I was not happy with Arthur’s performance against Ramirez, but I have decided to give the boy another chance,” said Uli Wegner, Abraham’s famed longtime trainer. “He did not do enough in Las Vegas to retain his title and call himself a champion. Now, he must work harder and show that this was just a blip in his character.”

The sentiment is shared by those who’ve guided Abraham’s career since his pro debut in 2003.

Abraham raced to his first title reign, knocking out Kingsley Ikeke in the 5th round of their Dec. ’05 clash. It was just his 19th pro fight, coming less than 2 ½ years into his career, but he proved a worthy champ in defending 10 times before moving up to super middleweight.

He soared to new heights after scoring a literal last-second knockout of Jermain Taylor in Oct. ’09 at the start of the Showtime Super Six super middleweight tournament. It appeared to have been his peak, as Abraham suffered three lopsided losses in a span of four fights, his career hitting a tailspin as the next step was uncertain.

A resurrection came in Aug. ’12, as did the launch of an unlikely rivalry when Abraham dethroned Robert Stieglitz to claim a super middleweight belt. The bout was the first of a four-fight set, with Abraham winning, losing, regaining and successfully defending the title over that stretch. Five successful defenses came of his second super middleweight reign, including a knockout win over Stieglitz in their fourth fight last summer and a narrow points win over Martin Murray last November.

The loss to Ramirez was tough to watch for those who’ve long backed the Armenia-born, Germany-based boxer, but his team isn’t quite yet ready to throw in the towel.

“Arthur has overcome many obstacles in his career – fighting through a broken jaw to defend his middleweight title against Edison Miranda and suffering defeat in the Super Six on his way to becoming a two weight World Champion,” points out Kalle Sauerland. “He has come back from defeat before and we’re sure he can do it again.

“It’s now about his legacy and how he wants to be remembered as a boxer. He must show that the fire still burns and that he’s willing to put in the work to become World Champion again.”