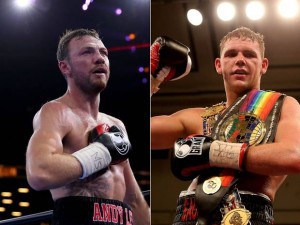 “I’m not going to leave that ring without the title.” – Billy Joe Saunders

The SHOWTIME BOXING INTERNATIONAL offering of the BoxNation telecast will feature analysis from SHOWTIME boxing experts Brian Custer, Al Bernstein and Paulie Malignaggi before and after the world championship showdown. An encore presentation of the bout will air on SHO EXTREME later that evening at 9 p.m. ET/PT. Here’s what Lee and Saunders had to say at their media workouts on Tuesday and Monday, respectively:

“I have a punch that can end a fight, lights out, in any given second.

“I won’t rely on the punch. I will look to dominate from the start with educated pressure.

“Saunders’ unbeaten record is a disadvantage. He’s always been in fights he’s expected to win and has been well managed by (Frank) Warren.

“I’ve never lost a fight on points and I never will on points. If I’m down on the cards I will go out swinging in the last round.

“Saunders being a fellow traveler does add another layer, but at the end the day it’s about how good you are and he’s not good enough to beat me.”

“I’m ready to go for Saturday night. This is the best camp that I’ve ever had. I’m prepared for the toughest test of my career, but I know that I’m in excellent shape to win this fight and become world champion. “Andy Lee is a tough fighter – he’s proved that by becoming world champion and having the type of career he has had. But I’m undefeated and hungry and know that I’m on the brink of fulfilling a childhood dream. I’m not going to leave that ring without the title.

“Training in Spain allows me to lock myself away from all distractions and focus solely on the fight. It’s hard being away from home, but it’s all part of boxing. It’s been a long camp, a tough camp, but after that I know that I’m ready to go through hell to make sure that I’m successful come fight night.

“The middleweight division is one of the hottest around and I’m prepared to fight any of the other champions in there once I win the title.

“Danny Jacobs had a great win against Peter Quillin, and then there is Canelo (Alvarez) and (Gennady) Golovkin. I know the importance of this fight for the division and I want my name to be among the very best. I’m taking it one step at a time, but I’m open to fight anyone.

“There has been no trash talk with Andy because we know what each person is about. We share a similar background and neither of us is going to take a back step.

“This is going to be a very exciting all-action fight because we’re going to leave it all in the ring. I know I have the skills to beat him and I intend to show the world why I’m among the best around.”

“The truth of the matter is that Eubank Jr. does not belong at the world level – he’s a phony. It’s as simple as that. I wasn’t impressed with his win over Gary O’Sullivan, who I’ve already beat. He thinks he can fool the public with a win like that, but he can’t.

“His aim now is to move up and fight the best guys in the world, but we saw what happened the last time he stepped up a notch and faced me: he was badly exposed. The same thing will happen with him if he fights someone like Danny Jacobs for the WBA title.

“You’re not the best middleweight in your own country and you want to fight a world champion and say you’re going to beat him? I think it’s a delusion and he thinks he’s greater than he actually is.

“Sooner rather than later he’s going to get exposed again as the fraud that he is. You can keep talking, but eventually you have to back it up in the ring against top-level fighters. He’s won his last fight and now he’s back talking (expletive) again like he’s the best fighter in history.

“If he has the balls to fight again, which I doubt, I would happily hand him another beating, this time in even more convincing fashion.”