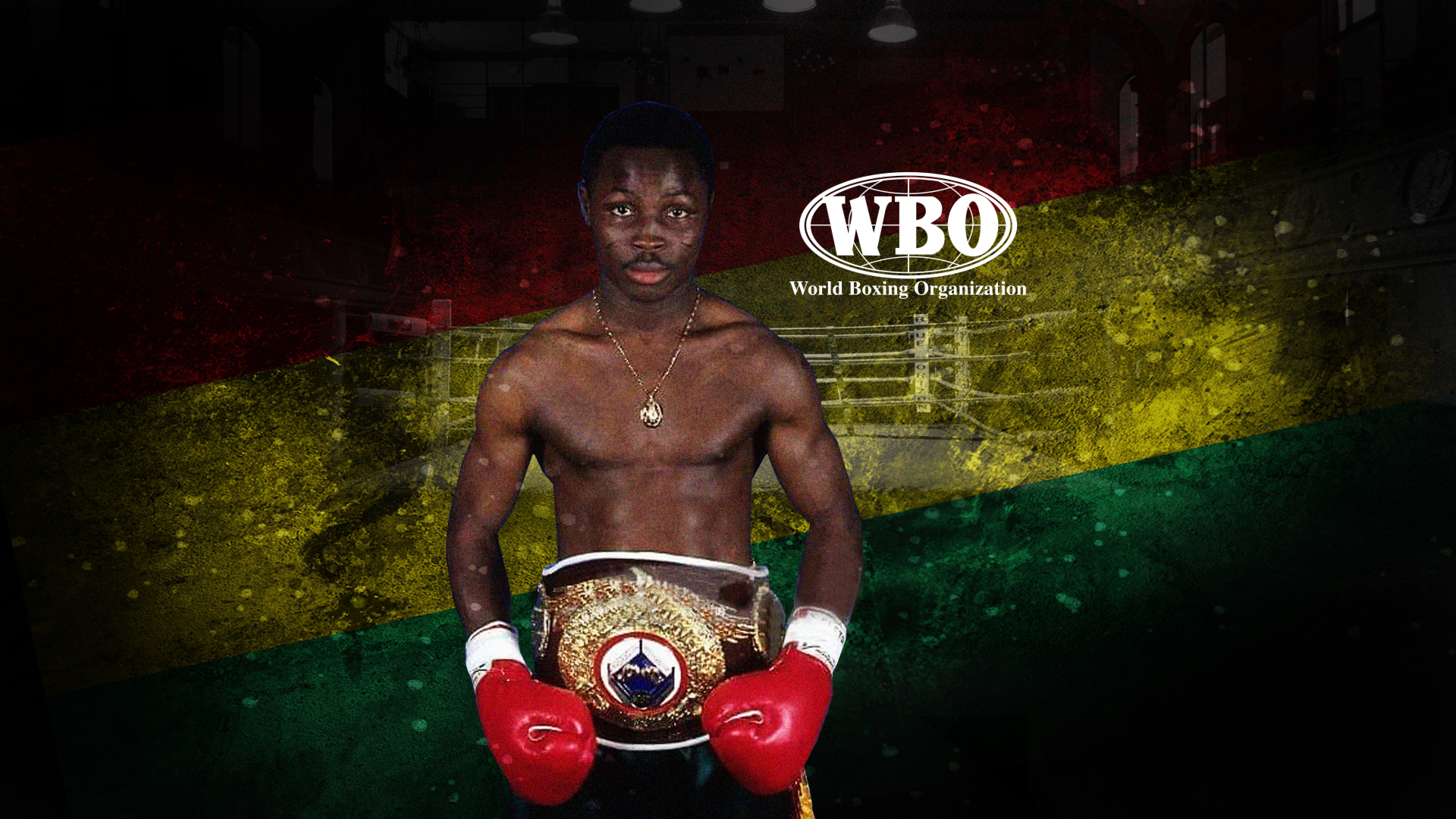 Alfred Kotey – From The African Slums To The Bantamweight Throne

“Alfred shows his class by crushing the British champion with chilling ease.”

A sold-out crowd of 1,500 had turned out to see brave Docherty’s take his shot, but he admitted the gulf between them was too great. It was over after 20 seconds of round four.

The 1988 Olympian who’d won the world title against Rafael Del Valle was set for big things.

“Azumah [Nelson] always said when you become world champion you must be prepared to fight to the death to defend it,” said a triumphant Kotey.

“He is my best friend and I will always respect his guidance. In Ghana his father-in-law is my manager: that is how close we are. I’m now ready for all-comers. I said before the fight it would be easy. He was brave, but just not in my class. I have no fears for any bantam around at the moment. I’m gunning for ‘Fancy Dan’ Prince Naseem Hamed because I don’t rate him as a fighter. He’s certainly very good at dancing but there’s a lot more to boxing than a circus act.”

It was around this time that Alfred met a talented young fighter about to turn over called Spencer Oliver.

‘The Omen’ was back from the Commonwealth Games in 1994 and Kotey’s team [KOPRO] offered him a deal.

“I was thinking about it and the opportunity came up to spar him,” recalled Oliver. “I thought, ‘He’s a bantamweight, let’s go for it.’ And it was an eye-opener. I went and sparred with him and he hit me with a shot where I could feel ringing from the top of my head down to my toes and I just thought, ‘Wow, that’s what a world champion feels like.’ It showed me how good they were. He was exceptional. I turned pro with KOPRO and we became mates. He was very quiet, very reserved and he didn’t say a lot, he’d crack the occasional joke but he was a phenomenal talent and if it wasn’t for him I don’t think I would have achieved what I did. He taught me so much. He also toughened me up because he wasn’t one to go light in sparring. He liked sparring hard and I’ve got really fond memories of him.

“We went to Ghana, we stayed at Azumah Nelson’s house and he loved Ghana, he loved his home, that’s where he was comfortable and Alfred showed me where he was brought up in Bukom and it was incredible, to see the slums he came from and to achieve what he did was amazing.”

Oliver went on to win the European title but suffered terrible injuries in his final fight when he was 12 rounds from the big time and world title fights.

By this point, Kotey had lost his world title to Daniel Jiminez in London and he was accepting assignments in the blue corner, against the likes of 21-2 Guty Espadas and 22-1 Juan Manuel Marquez after he moved to the USA.

Oliver was recovering, learning to walk again, and inevitably – with Kotey on America’s West Coast and with Spencer having enough on his plate – they lost touch.

Within a handful of fights, Kotey had gone from ‘superb’ to ‘name’. Then he went from ‘name’ to ‘opponent’.

He plugged away but his career was rudderless.

In 2001 he became the first man to take Brazilian puncher Acelino Freitas the distance. ‘Popo’ went from a gleaming 29-0 (29) to 30-0 (29). It was a non-title fight but Freitas, then the WBO super-featherweight champion, added the WBA belt from Joel Casamayor in his next contest.

For Kotey, however, the decline had set in and when you get to that point in boxing, it’s irreversible and only going to get worse.

He missed 2002 through malaria but lost to an up and coming Orlando Salido in October 2003 widely on points over 10 rounds.

“Kotey’s back for a beating,” headlined Boxing News.

“Aside from flooring Salido,” wrote the late Jim Brady, “Kotey was always under fire as he struggled to get by on finesse. Salido is a useful fighter and probably would have won even if Kotey had been active.”

Then Brady signed off, “In the last three rounds the once-stylish African looked like a pained sleepwalker as Orlando banged away.”

Kotey won just two of his last 11 and lost to the likes of Freitas, Salido, Jose Miguel Cotto, Antonio Diaz, Victor Ortiz and Anthony Peterson. He always gave the prospects rounds. He took them all the distance, be it over eight or 10.

Punctuated by the occasional appearance in Ghana, he was mercilessly used all over the USA.

It became too much for Oliver to watch, even from afar.

“I saw him losing a few, then I thought he’d retired, then I saw he was boxing again and he didn’t retire until he was 44 and it’s sad if I’m honest,” Spencer said. “I stopped following his career when I saw he was getting beat a lot. You know how it goes, you see great fighters and they keep fighting and they keep getting beat by people who would never have really tied their bootlaces. You knew it wasn’t the same guy, it was a shadow of the guy. I thought it was so, so sad.”

The ambition had been replaced by desperation, the expectation by resignation.

Despite the train wreck end to his stellar career the African was only stopped once, an emphatic full-stop in his final fight to then 15-0 countryman Frederick Lawson who was born a year after Kotey had made his debut in 1988. Alfred couldn’t continue after round three. This was 2012.

That last loss was back in Ghana but Kotey would return to live in the USA.

He died in the Bronx, New York on Tuesday, June 30, aged 52 after suffering with a short illness and then having a stroke.

“I’ve got really fond memories of him,” said a despondent Oliver. “I believed he was the guy who was possibly going to beat Naseem Hamed. I’d shared a ring with both of them and I just thought he was exceptional. I knew he was tight at bantamweight but I always thought at some point he would fight Naz and if anyone could beat him, Alfred would give it a go.

“As a person he was just a beautiful human being who was always willing to help.”

The WBO family is deeply saddened by the passing of the great Alfred Kotey, the organization's first World Champion from Ghana. Kotey defeated Rafael Del Valle to win the Bantam crown on July 30th, 1994. May he rest in peace. pic.twitter.com/xpoaPoKskr