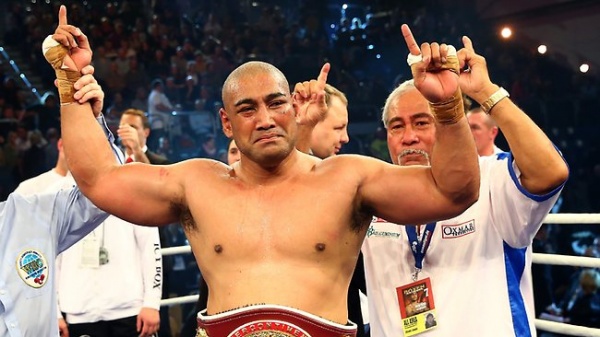 Alex Leapai’s management wants to stage his looming WBO heavyweight world title bout against Wladimir Klitschko in Asia, where the Queensland slugger is known as the “Australian Mike Tyson”.

Leapai returned home on Tuesday after last weekend upsetting number one contender Denis Boytsov in Germany in a world title eliminator, despite suffering a calf injury in the seventh round.

The victory earned the 34-year-old fighter a crack at the formidable Klitschko.

Leapai’s trainer and manager Noel Thornberry expects the bout to take place between April and June.

“We’re hoping to bring it to Asia, as long as it pays well for everybody,” Thornberry said.

“I don’t think the Klitschkos will be too upset either, because it will introduce them to a new market.

“We’ve been doing a little bit over in Macau and Alex has actually had two fights in Asia.

“He’s got an enormous following over there, they call him the Australian Mike Tyson.

“When he got over there, you couldn’t walk up the street because people were mobbing him.

“After his first win over there they had to get a police escort to get him back to the dressing room from the ring.”

He said an ultrasound revealed Leapai had suffered two tears of his calf.

“The good news is they don’t think it’s going to require any surgery,” Thornberry said.

“We’ll probably take two weeks of complete rest and then start back in with some core strength and conditioning and flexibility.”

While Klitschko will enjoy a huge 15cm height advantage over Leapai, the Australian has proven he can knock down tall timber.

In 2011, he unleashed a savage uppercut to knockout 207cm Russian giant Evgeny Orlov, a sparring partner of Klitschko.

“With the right preparation we’re very confident he’s going to do it (beat Klitschko),” Thornberry said.