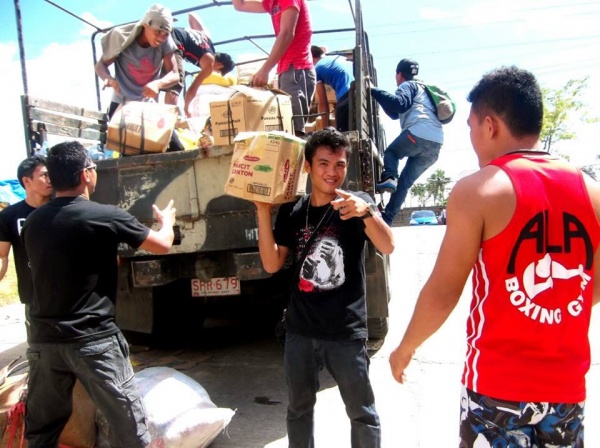 ALA pugs help in relief operations for Yolanda victims By:  Dale G. Rosal / Photos taken from ALA Boxing Facebook /

ALA BOXING Gym stalwarts Merlito “Tiger” Sabillo and Donnie “Ahas” Nietes on Wednesday led a group of ALA Boxing Gym boxers in helping relief efforts for the typhoon victims in the Visayas. The WBO minimumweight champion Sabillo and WBO light flyweight champion Nietes are set to face different opponents this Nov. 30 in the Pinoy Pride XXIII: Filipinos Kontra Latinos at the Araneta Coliseum. Both are supposed to be busy training for the fight but they took time helping volunteers at the ABS-CBN complex in Jagobiao, Mandaue City repack and load the goods to be transported to the typhoon affected areas in Northern Cebu and in Eastern Visayas. Sabillo even called on other aspiring boxers to help, saying what they were doing was actually a good training for the sport.

Sabillo will fight Nicaraguan Carlos Buitrago while Nietes will be defending his title against Sammy ‘Guty’ Gutierrez.