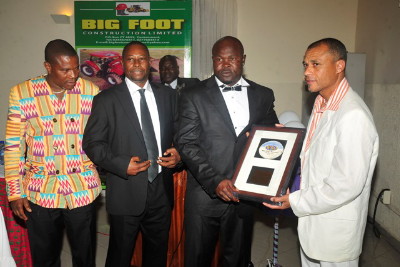 The exploits of hard hitting crowd puller Bukom Banku in 2011, has received due recognition from the World Boxing Organization (WBO).

The recognized boxing body has given Banku aka Braimah Kamoko the new award of WBO Africa Boxer of the year in the Light Heavyweight category.

And by the feat, Banku is now the number one on the continent and the second best in the world for the year under review. He emerged tops out of 14 African champions.

The award has placed him in a better position for a World title in the next few months, stated Andrew Smale, vice president, WBO Africa at the awards presentation ceremony in Accra last Saturday.

The WBO Africa vice president revealed that Banku reigned supreme due to the fact that the Ghanaian boxer mounted the ring just on two occasions but the enormity of the bouts warranted the award.

The boxer expressed profuse thanks for the honour done him and promised to extend his dominance to the world stage.

The Chief Executive Officer of Golden Mike Promotions, promoters of Banku, Mike Tetteh pointed out that the recognition was timely. ‘The recognition has come at a time when boxers, promoters, investors, managers and fans needed motivation to keep the momentum of the sport intact.’

Golden Concept Management International CEO, Henry Mainly Spain, manager of Banku, mentioned that boxing is one of the most lucrative businesses in the World. He called on corporate Ghana to come on board to brainstorm as business executives to provide opportunities which will make the sport attractive.

Banku, who turned pro in 2000, has kayoed 16 of the 22 pugilists that he has encountered, with no defeat. He received a beautifully designed plaque.

The award ceremony was originally scheduled for the US and later to South Africa but was moved to the boxer’s home country due to logistical challenges of Banku’s management.