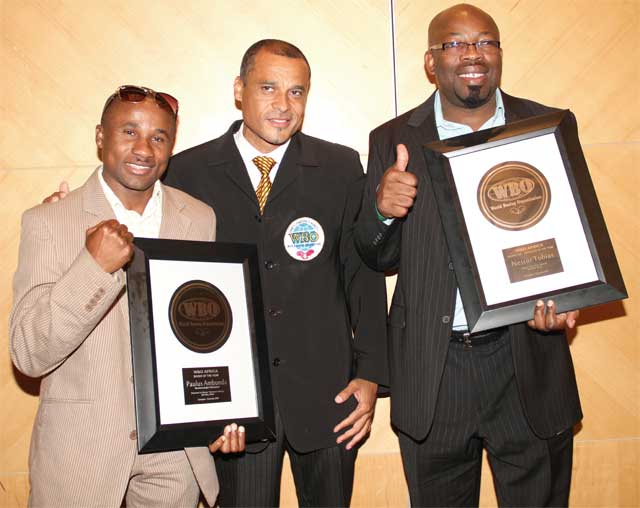 NESTOR ‘Sunshine’ Tobias on Wednesday won the WBO Africa Promoter of the Year award for the second successive year.

Financial constraints meant that he could not accept the award in person.
Tobias will be officially presented with the award byWBO fourth vice president Andrew Smale before WBO Africa bantamweight Paulus ‘The Rock’ Ambunda’s title defence fight next Saturday.
Arguably the top promoter in the country, Tobias said yesterday that he was not surprised to win the prestigious prize as it was testimony to the hard work put it by his stable, a point his detractors need to take note of.
“It’s through the boxers’ hard work and commitment that we are able to get these awards. To those people who are always talking negative about us, they should know that these things don’t come for free. For us boxing is our livelihood. It is all we do.”
The WBO Africa Boxer of the Year 2011 was awarded to of Ghana, a man Tobias felt had scored a dubious victory over Namibia’s Vikapita Meroro in July.
Ambunda, who faces challenger Bongani Mahlangu from South Africa, was the recipient of the award last year.

Keeping true to his nature, Tobias seized the opportunity to promote Ambunda’s upcoming fight. ‘The Rock’ Ambunda has the makings of a world champion, the handler said.
Tobias has plenty of faith in the fighter, whom he said has the potential to emulate former two-time middleweight world champion Harry ‘Onkugo’ Simon and former WBA lightweight title holder Paulus ‘The Hitman’ Moses.
According to Tobias, the 31-year-old Ambunda can secure his chance at world title shot once he disposes of Mahlangu.
The WBO bantamweight world strap is now vacant after two time champion Nonito Donaire stepped up a division, a development that has edged Ambunda closer to realising his dream.
“Ambunda is at his peak now,” Tobias said.
“He is rated number three in world and if he wins he can improve that position and become the mandatory challenger.
“It’s also motivation for him. I want him to be the third guy from Namibia to fight for a world title.”