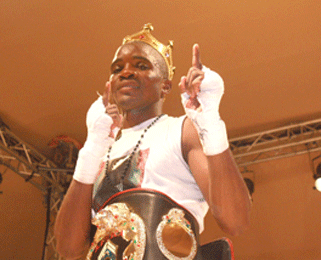 Naidjala confirmed this when he marked another milestone in the tough and demanding world of professional boxing with a gallant victory over Kenyan opponent, Emilio Norfat.

The Prince successfully retained his WBO belt with a unanimous points decision over 12 rounds of heated action at the Windhoek Country Club Resort & Casino on Friday.

After a well-balanced first round, it became a dog-eat-dog affair with both boxers showing no sign of retreat by keeping each other engaged with some great combinations of punches.

In the 5th and 6th rounds, Naidjala upped his tempo and started unleashing some impressive blows that kept the skilful Norfat running for safety for the better part of those rounds.

In the final rounds, Naidjala started taking the fight to the Kenyan, hitting his opponent with some well-measured heavy body blows and a combination of quick upper-cuts and jabs that kept Norfat at bay until the final seconds of the fight.

Naidjala now boasts a remarkable record of 14 wins from 14 bouts in the paid ranks.

In other action, the going got too tough for Sacky “Izinyoka” Shikukutu after the somewhat rusty pugilist fell prey to the merciless punches of Tommy Hango.

Hango, who was in no mood to compromise right from the outset, displayed some fine points in the trading of leather with an avalanche of impressive blows, which Shikukutu failed to reply to.

Hango kept up the momentum and emerged victorious with a unanimous points decision to clinch the National Welterweight title.

In the under-card fights, Manfred Haimbanga defeated Peter Philipus with a 4th-round knockout in the Junior Lightweight division, while Mukwendje Toivo trounced Dawid Egumbo in the Featherweight division.