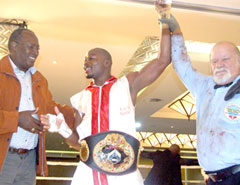 WINDHOEK – World Boxing Organization (WBO) Africa Super Middleweight champion, Wilberforce Shihepo, retained his belt after an unconvincing unanimous decision triumph over a stubborn Johannes “Tito” Mwetupanga in the main supporting bout at the Windhoek Country Club on Saturday night.
The under-card bout attracted massive interest from the paying public as a result of the pre-fight insults that flew around between the two boxers, with Shihepo being the most vocal and promising to beat the lights out of his opponent in their 12-round bout.
However, the more streetwise and skillful Mwetupanga proved a tough nut to crack and managed to fend off the onslaught by the muscular Shihepo in the opening four rounds before building momentum, as he planted some decent punches that had the flamboyant champion in a state of confusion.
In the end, the result was a fair reflection of the otherwise closely contested battle, but Shihepo was left with much work to do ahead of his next title defence as he demonstrated a serious lack of understanding of the basics of the trade.
In the best fight of the night, crowd favourite Sackey “Izinyoka” Shikukutu was back at his best when he demolished Tommy Hango in a one-sided encounter via a 10th round stoppage that saw him unleash a vicious left hook just one-minute-and-53-seconds into the 10th round of their 12-round bout.
The hard-hitting Shikukutu was in total control of proceedings from the outset and it came as no surprise when he knocked the lights out of his out-of-sorts opponent to claim the vacant WBO Africa Interim Welterweight belt.
In the main bout, WBO Africa Interim Bantamweight champion Imms “Prince” Naindjala had an easy payday in his non-title international bout against the hard-as-nails Luis Singo.
The stocky boxer from Ecuador found himself on the receiving end of Naindjala’s merciless punches and visited the canvas quite frequently but somehow managed to beat the count on each occasion.
The one-sided contest came to an abrupt end when Naindjala accidentally caught his opponent with an elbow – causing a gash above Singo’s left eye.
The Namibian was rightly declared the winner by a technical decision since he was way ahead on points after 8 rounds.
The rule clearly states that if the fight has gone beyond four rounds in such an event – the boxer with the most points will be declared the winner.
Junior Lightweight rookie boxer Toivo Mukwendje extended his winning streak to two out of two fights since joining the paid ranks. Mukwendje defeated fellow rookie Mathias Johannes with a technical knockout (TKO) in the 2nd round. Sakaria Lukas easily waltzed past David Egumbo with a 2nd round stoppage in their catch weight non-title four rounder.
Peter “The Butcher” Malakia’s woes in the boxing ring continued after he was sent packing with a controversial 2nd TKO for the vacant National Lightweight title against Samuel Kapapu.
Immanuel Andeleki came out tops in his lightweight non-title four rounder against Leonard Shemuvalula – winning on points.