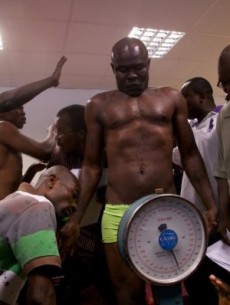 Ghanaian boxer Braimah Kamoko a.k.a Bukom Banku had to hit the scales twice this on Friday morning before securing the green card to defend his WBO Africa light heavyweight titles against his Namibian opponent Hamza Wandera at the Accra Sports Stadium on Saturday.

Bukom Banku failed to meet the required 175 pound weight limit for that category when he exceeded it during the weigh in.

An official of the World Boxing Organization, who was present, ordered it had to be done again after two hours. The Ghanaian boxer was left with his fate in his own hands as he had no option but to lose a couple of pounds in order to keep his title. This means Kamoko would have lost his titles ahead of the fight, if he had failed to meet the required weight expected by the association.

The Ghanaian boxer would have only fought for mere formality and a win would not have still changed the decision to strip him off his titles.
Kamoko was, however, able to shed of a couple of pounds after an hour of intense running and returned to the scales to make the weight.

Meanwhile, his Namibian opponent has rubbished the Ghanaian boxer’s wrath by saying he will send him packing. Bukom Banku also appealed to the Vice President John Dramani Mahama to be present at the Accra Sports Stadium to watch the fight.