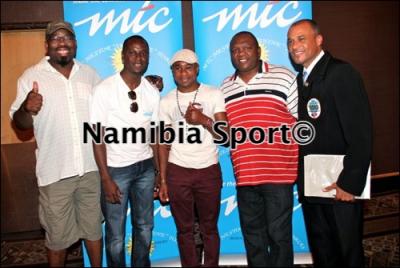 Accolades stream in for Namibian boxing Accolades for Namibia’s successful hosting of Saturday night’s world title fight continue to stream in with Namibia now a contender to host the World Boxing Organisation’s annual convention in October.

At a post-fight press conference on Sunday, the WBO’s Africa vice president Andrew Smale said that the WBO delegation, led by its vice president John Duggan was highly impressed by what they saw.

“John Duggan has been speaking volumes about the organisation, hospitality and the standard of the fights and not many people expected what they saw, it was world class. He was so impressed that he told me he would strongly recommend that the next WBO convention in October be held in Namibia,” Smale said.

“A very hearty congratulations to Paulus Ambunda. You are standing at the top of the ladder now but always remember where you came from and who helped you get there. I always saw the potential in you and you are a great advert for the WBO Africa because you are our first boxer to become a world champion,” he said.

“Thanks to MTC and the Namibian government. In all my travels through Africa I have never seen a sporting code so well supported,” he added.

“Congratulations to the Namibian people and the new world champion Paulus Ambunda. Unfortunately Pungluang lost but I am thankful for the hospitality that we received here. I don’t know what will be next for me, I will go back to the Philippines to continue training my boxers,” he said.

Namibian promoter Nestor Tobias said he knew that Ambunda could win the title.

“The Rock surprised everyone and the world’s media did not give him a chance, they thought it would be a walkover, but I knew Paulus Ambunda can beat any bantamweight fighter in the world,” he said.

Tobias said it was very difficult to stage the fight, while he also received a lot of criticism but he was convinced that he could pull it off.

“I went through tough times to get the fight here and you must have balls to do this. We gave the Thai camp an offer they could not refuse and convinced them to come and fight here in Namibia. I didn’t have a cent in my bank account when I made the offer. I gambled my life on this fight and there were a lot of negative comments, saying it would not take place, but I had confidence in Namibia’s people and business community,” he said.

Meanwhile, Paulus Moses and Tyson Ushona could both also be close to getting world title fights before the end of the year following their impressive performances on Saturday. Moses beat South Africa’s Mzonke Fana on a fourth round technical knockout to retain his WBO International Lightweight title, while Ushona beat Ghana’s Emmanuel Klottey on a unanimous points decision to retain the WBO Africa welterweight title.

According to Smale, both fighters could now be in contention for world title shots before the end of the year.

“I am very excited about where Paulus Moses is going. He beat a fighter with a very good pedigree and will go up to at least number two in the world on the new WBO rankings. Ushona is rated in the top four and will move up and he is also in the reckoning for a world title fight. Namibia could even have one or two more world title fights before the end of the year,” he said.