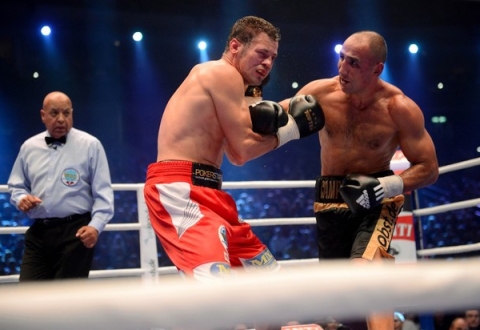 Arthur Abraham (42-4, 28 KOs) is set to reignite his feud with super middleweight rival Robert Stieglitz (47-4-1, 27 KOs) on July 18 at the Gerry Weber Stadium in Halle, Germany. The boxers meet for a fourth time, with the WBO crown on the line, following a memorable trilogy of world championship fights.

‘’The battle for super middleweight supremacy continues,’’ said promoter Kalle Sauerland. ‘’I’m hard pressed to think of any other trilogy in modern boxing history that has provided such a high level of drama. For that reason, we go again. On July 18, for an unprecedented fourth time, Arthur and Robert will contest the WBO super middleweight title.’’

Abraham and Stieglitz first met in August 2012, where a points decision earned Abraham the WBO strap. In a March 2013 rematch, Stieglitz got his revenge with a fourth-round technical knockout victory. The belt once again changed hands in March 2014 with Abraham flooring Stieglitz on his way to a split decision win. The stage is now set for a fourth battle between ‘King Arthur’ and his mandatory challenger Stieglitz at Germany’s famous Gerry Weber Stadium.

For the defending champion Abraham, July 18 offers him the opportunity to write the final chapter in his rivalry with Stieglitz. ‘’Robert is mandatory challenger, so of course he deserves his shot,’’ said Abraham. ‘’I’ve enjoyed our rivalry, but like all good things, this must come to an end. The Gerry Weber Stadium will provide the perfect venue for me to finish our feud. I had Robert down in the twelfth-round of our last encounter, but this time he will hit the canvas a lot sooner!’’