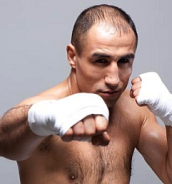 NUREMBERG, Germany (AP) — Arthur Abraham of Germany successfully defended his WBO super middleweight title with a technical knockout over Mehdi Bouadla of France in the eighth round Saturday night.

Abraham dominated until American referee Mark Nelson stepped in to stop the one-sided contest 2:11 into the eighth round when Bouadla’s vision was impeded by streaming blood from repeated left and right blows.

”This is where I started boxing. To be here now, in front of 10,000 people as world champion – there’s no better feeling,” Abraham said after his first defense of the title he won on points from Robert Stieglitz in Berlin in August.

”We have only one recipe – to win. But I have to say that he never gave up. He kept going to the end, and he punched hard. 2012 was a great year. I became world champion. I’m very happy.”

Abraham (35-3, 28 KO), an Armenia-born German, had been in such control that he received a telling off from his coach after the fourth round for his gung-ho approach.

”It’s not necessary,” Ulli Wegner told the 32-year-old, who continued where he left off in the next rounds.

Nelson stopped the fight briefly in the seventh so the doctor could examine the cut beside Bouadla’s right eye.

The 30-year-old challenger (26-5, 11 KO) was allowed to continue, but offered nothing against Abraham’s bombardment and Nelson eventually did the humane thing.

”He boxed very well. He deservedly held onto his title,” Bouadla said. ”He boxed like a champion. I’m a competitive boxer, I tried everything, so there’s nothing to be ashamed of. It was fair enough that the referee stopped the fight. (Abraham) boxed with a lot of power, with a lot of pressure. I thought I could catch him on a counter, but he was very good.”