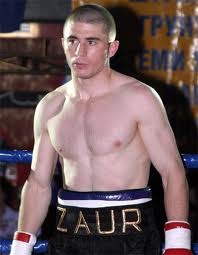 Abel Sanchez: Baysangurov Will Come Back in 5-6 Months Abel Sanchez, the trainer of ex-WBO light middleweight champion, Zaurbek Baysangurov (28-1, 20 KOs), revealed the reasons behind his protégé’s recent withdrawal from the fight with a mandatory challenger Demetrius Andrade, scheduled for July 6 in Kiev, to Sportbox.ru .

“Zaurbek was training very hard, trying to get in shape. On the Wednesday of that week, we had an open workout, which included an eight-round sparring session, and Zaurbek felt pain in his back afterwards. On Thursday we did a bit of jogging, but his condition worsened. I think it was an old injury he had received in the past. Then we had a light training session and another period of jogging. His back gave up; he was in sharp pain, so he had to visit a doctor”.

“Zaurbek had been training so hard for the fight, but this cancellation will be a blessing after all. He would have been unable to complete his task against Andrade without proper ring movement. I guess he could be back in five or six months from this point”.

Baysangurov’s WBO title was declared vacant, with undefeated former US Olympians Demetrius Andrade (2008) and Vanes Martirosyan (2004) being the frontrunners for the vacated belt. The winner of this bout will have to take on Baysangurov right after that.