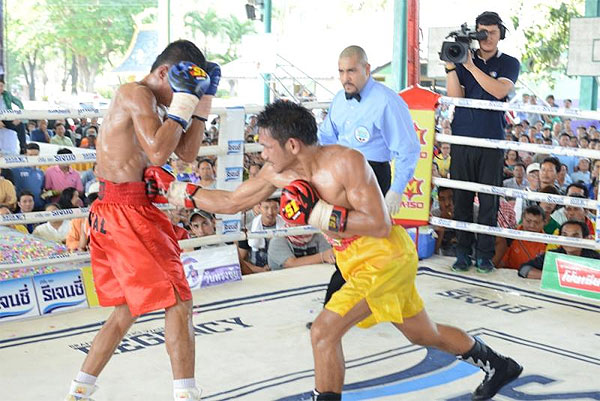 The title bout was stopped in the seventh round as Pabustan suffered from excessive bleeding from a wound over his left eye. At the time, all the three ringside judges had scored 70-63 in favour of the…

At the time, all the three ringside judges had scored 70-63 in favour of the Thai champion.

It was the first successful title defence for Pungluang, who had claimed the vacant belt by beating Ryo Akaho of Japan in Ratchaburi in August last year.

Pungluang’s record improved to 52 wins against three losses, while Pabustan, ranked fifth in the division, slumped to 26 wins, six draws and three losses.

The Thai claimed the same title the first time by stopping AJ Banal of the Philippines in the ninth round in 2012 but lost it in his first defence against Paulus Ambunda in Namibia in March 2013.

“It was a tough and exciting fight for all the fans. Pabustan turned out to be tougher than we expected,” said Pungluang’s manger Pariyakorn Rattanasuban.

“Punglung is also strong and is hard to beat. I am quite satisfied with his performance.”

With a win over Pabustan, Pungluang now has a mandatory fight against Marlon Tapales, also from Philippines, lined up.

Tapales became eligible for the title crack, which has to take place within 90 days, after stopping Shohei Omori of Japan in the elimination fight in December.

“Definitely, we will bid to host the fight in Thailand,” said Pariyakorn.

“Pungluang still has some weaknesses and he needs to train a lot before fighting Tapales.”

http://www.bangkokpost.com/news/sports/862584/strong-pungluang-retains-wbo-belt. View our policies at http://goo.gl/9HgTd and http://goo.gl/ou6Ip.