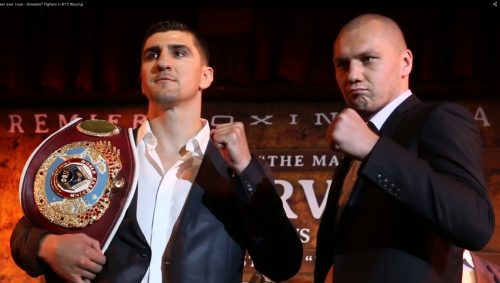 “It was the longest staredown ever – at least the ones I was part off,” said promoter Lou DiBella describing the 2 minute 58 second staredown between WBO cruiserweight champ Marco Huck and undefeated challenger Krzysztof Głowacki. It happen during final press conference in NYC and the intensity of both fighters was absolutely tremendous. Artur Szpilka, Głowacki’s countryman and close friend only added to it, practically challenging Huck to a slightly unscheduled fight on the BB King Bar stage. Also present, but very quiet in comparison were Antonio Tarver and Steve Cunningham, who will be in the main event on Friday night’s Spike TV telecast from the Prudential Center in Newark.