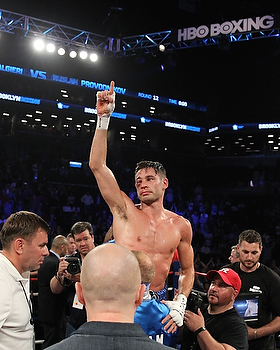 Flush with the success that he had from taking the WBO junior welterweight title from Ruslan Provodnikov back on June 14th, Star Boxing’s pride and joy, Chris “The Fighting Pride of Huntington” Algieri, was eager to talk about winning the belt and his challenge to the great Manny Pacquiao for Pac Man’s WBO welterweight belt scheduled to happen on November 22nd.

His right eye, badly damaged in his title winning effort, appeared to be completely healed, as well as the broken nose he suffered. Algieri looked in every way a superstar. Algieri admitted that fighting Pacquiao, “Is surreal, because it is something I’ve been thinking about so long, and visualizing this moment and now it’s here.”

He actually began to discuss the possibility of challenging Pacquiao even before he won the Provodnikov fight. The prospect was initially discussed by Top Rank’s head man, Hall of Fame promoter Bob Arum.

“I didn’t know how real it was,” said the newly crowned champ. “I know that Bob Arum mentioned it prior to the Provodnikov bout, and generally when Bob says something it’s a big deal. There were murmurs about the fight and about a week later (after the Provodnikov fight) we had worked out the details.”

The naysayers have come out of the woodwork for Pacquiao fight as they did for the Provodnikov contest, although he admits the critics are a lot more unsympathetic regarding the Pacquiao matchup.

“I am a self motivating person,” he said, “It doesn’t affect me negatively or positively.”

Algieri’s promoter, Joe DeGuardia of Star Boxing, is taking a backseat to the venerable Bob Arum for the November 22nd showdown with Pacquiao.

“Chris is going to carry this promotion, and that’s why Bob is the top promoter in the industry,” explained DeGuardia. “Bob’s a Hall of Famer who’s been in the business for fifty years promoting top fighters…..Ali, Leonard, Hearns, you name it. He saw it before the Provodnikov fight. He knew it before. He saw it because it’s there, Chris will be the attraction.”

Algieri is very confident of a victory over Pacquiao and stated that he will gain even more confidence during training.

“I’m not the same person I will be on November 22nd as I am today.”

According to Algieri, Pacquiao has not fought his style in years and although Algieri is moving up in weight, he is actually the bigger man.

“Margarito was bigger,” he pointed out. “But not an athletic guy; a straight forward slugger. Not a guy who is going to be moving pushing, pulling, using his jab. Manny kills those guys; he picks them apart.”

Algieri said that he has watched all of Pacquiao’s fights and knows that he will be facing a great fighter, but he remains confident.

Much has been said about drug testing especially where Pacquiao is concerned, given his history of being questioned about whether he is juicing, but this does not worry Algieri.

“I think every fighter should be blood tested. There’s no reason not to. When I got approached about drug testing I said of course. I got nothing to hide. I have no fear about what I put into my body and what I can do.”

He added that he has no comment about whether Pacquiao uses PEDs and he has confidence that Pacquaio will be carefully tested and all things should be fair.

He believes that when Pacquiao was smaller he was an explosive powerhouse and that he is more affected by his moving up in weight than the fact that he is aging (Pac Man will be a month short of 36 by fight time).

“I’m expecting what he is,” said Algieri. “He’s an explosive guy, very quick. In and out, I think he’s one of the best in and out, side to side guys out there. He puts on pressure without just going forward. Ruslan is a straight ahead guy and puts on pressure. Manny puts on pressure too but it’s more like an ebb and flow, he cuts an angle and moves laterally. He can use his jab when he needs to, he can box. He fires fast combinations moving in and out.” Will Algieri be faster?

He said that the biggest thing that he learned about himself against Provodnikov was that strategy comes before pride.

“I learned that I’m not too proud to take a knee,” admitted the fighter. “When I was younger I would have been too proud to go down. He (Provodnikov) didn’t knock me down a second time, I took a knee. I was trying to figure out what was going on. At the time my eye was still blurry. After I got up I could see. So my vision returned. I don’t think I would have done that back in my kickboxing days.” It may be to the advantage of Algieri that due to the time differential between Macao and the US, he will be entering the ring at 10 AM local time so that HBO PPV can broadcast the event in the evening hours in the US.

“I’m a morning person,” said Chris. “I hate having to fight at midnight.”

He said that he feels fine now, but he is not sparring yet, and won’t until doctors clear the broken nose he also suffered in that first round.

Algieri is healing fast. “The eye was opened on the second day,” he recalled. “The swelling was gone in the first week. I was on FOX Business on Wednesday. I put shades on and you couldn’t tell.”

He anticipates he’ll begin training in earnest about eight to ten weeks before the big fight.

“The end of August or early September.”

An admitted gym rat: “This is the longest I’ve been out of the gym,” admitted Algieri, “Because the doctors advised me to.”

He is already looking forward to the press tour, the travel to China, and the training that awaits him.

“I like the fact that we will have a civil tour,” said Algieri. “We are not going to get aggressive, there’s not going to be some ugly stare downs.”

After a tour of Asian cities including Shanghai, Macao, and others, it’s off to a tour of the United States. So far DeGuardia is sure of only Los Angeles and New York as tour stops, with more to be added later. DeGuardia called this the biggest fight in that part of the world since Tyson-Douglas back in 1990 in Tokyo.

Chris’ dad was at this interview and attends all his fights including the Provodnikov fight. His mother stays home. How did she react when she saw his damaged eye?

“Funny story,” stated Chris. “This guy here,” pointing at his father, “Almost had a heart attack. Mom? Cool, just happy I won. It didn’t faze her one bit.”