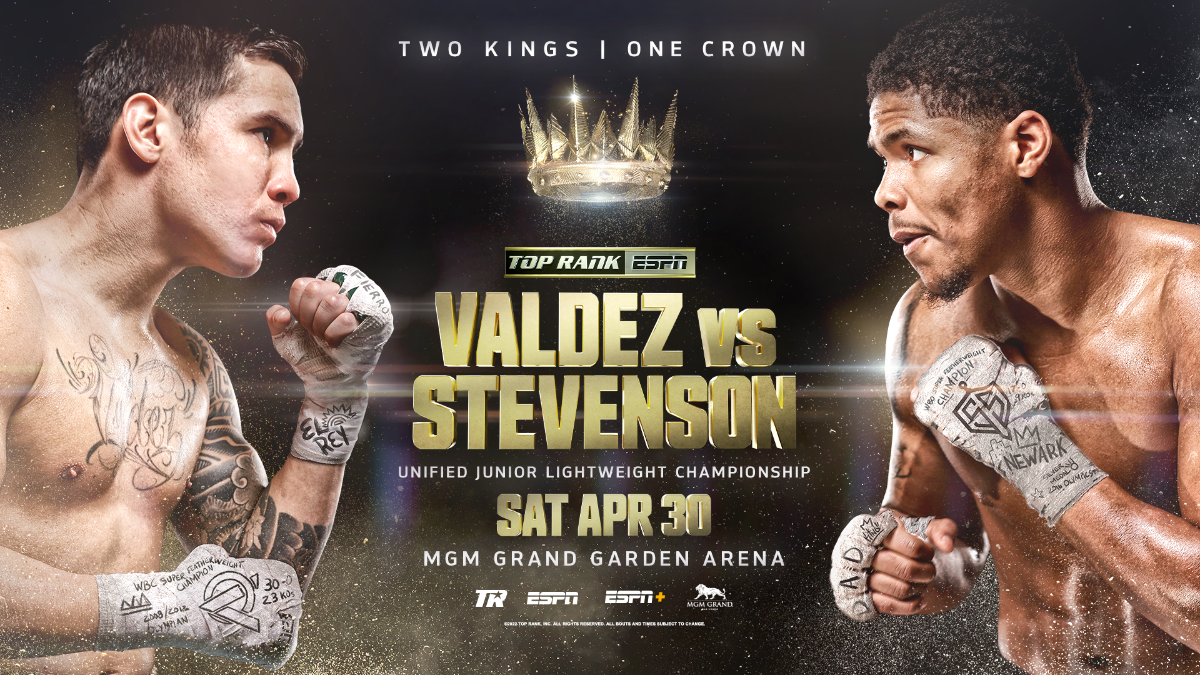 The bitter rivals will compete to become the division’s first unified champion since 2005, and the winner will become the first Ring Magazine junior lightweight champion since Manny Pacquiao in 2008. Valdez, from Nogales, Mexico, is a two-division world champion who defended his WBO featherweight crown on the same night Stevenson turned pro in April 2017. Stevenson, also a two-division king, is coming off a title-winning knockout victory over Jamel “Semper Fi” Herring.

Four days from fight night, this is what Valdez and Stevenson had to say.

“Even though I had a very tough challenge against Miguel Berchelt, this is the toughest and biggest fight of my career because Shakur has been talking for quite some time. Here we go again. The odds are against me, and everyone thinks that he will walk all over me, but just like against Berchelt, I will use that as motivation. I know I have a tough fight in front of me, but this is not something that I haven’t done before. I have worked very hard in the gym, and as always, I’m going to give it my best and leave it all in the ring. Like we say in Mexico, I’m willing to die on the line just to win. That’s all that matters to me.”

“Ever since I was a kid, I have dreamed of being the main event at the MGM Grand Garden Arena in Las Vegas. It just sounds beautiful. Sounds like you made it. This is the major leagues. I’m very excited. I’m enjoying every moment. I’m enjoying this journey of greatness. When I win this fight, I will be one step closer to being on the pound-for-pound list, and more importantly, I will be a step closer to accomplishing my dream of being considered one of the best fighters in Mexican boxing history. I want my name to be among all these great Mexican fighters, like Morales, Barrera, Marquez, and Chavez. For that to happen, I need to win this fight.”

“We are back in Las Vegas for training camp, and everything is going great. My grandfather and my team have me looking and feeling super sharp, and everyone is going to see the results of all this hard work on April 30.”

Getting the fight against Valdez

“This fight is three years in the making. Everyone knows that I’ve wanted to fight Oscar Valdez since 2019 when he vacated his belt at 126 instead of fighting me. He avoided me for as long as he could, but now is the perfect time for this fight and the fans are in for a show when we finally step into the ring.”

“I am the best 130-pound fighter in the world, and I will prove it when I beat Oscar Valdez and become unified champion. I won’t stop there, though. I want to become an undisputed champion at 130, and beating Oscar Valdez is the next step.”

A superstar will be born on April 30

“The world hasn’t seen everything that Shakur Stevenson can do in a boxing ring yet. I am boxing’s next superstar, and my performance on April 30 is going to prove it. Come out to the MGM Grand or tune in on ESPN because you don’t want to miss this fight.”